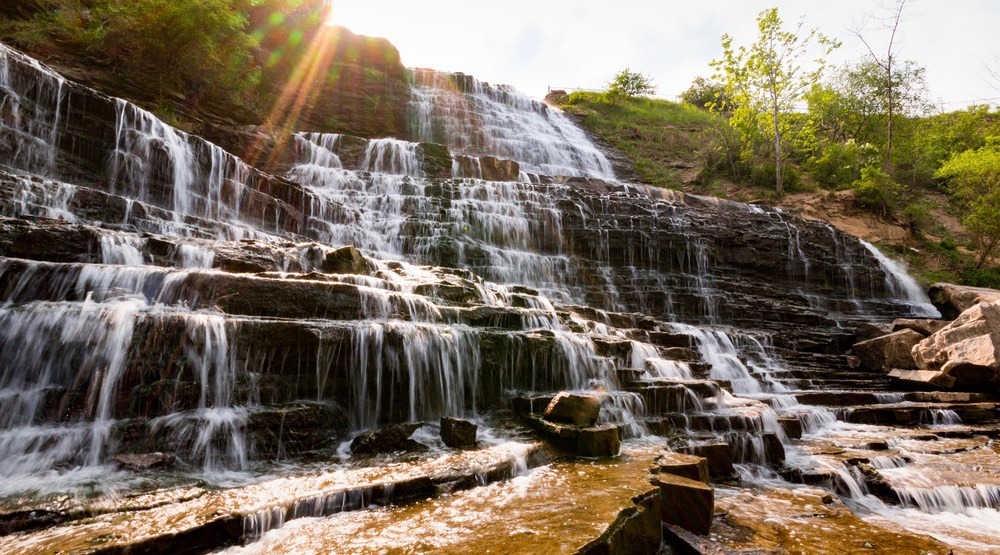 It’s hard to even mention waterfalls without instantly wanting to break into dance and relive TLC’s famed track. But better yet, how about playing the jam while actually enjoying actual waterfalls?

Toronto is known for its attraction-heavy landmarks and while we’re always stoked about that, mother nature also has some free-flowing gems that are within hours mere of downtown. You’re probably aware of Niagara Falls, since it’s such a sought after destination, but these other natural escapes should not be forgotten.

Whether you’re looking to spice up your hiking and outdoors game, in need of a mini day trip or two, or just need a “serenity now” moment, taking some time to see these sweet sweet waterfalls may just be what you need.

Here are 7 waterfalls near Toronto that are closer than you might think.

Running 41 metres tall and 10 metres wide, Tews Falls is the tallest waterfall Hamilton has to offer. This waterfall, which is connected to the Bruce Trail and is part of Spencer’s Gorge Conservation Area, is a great escape for those also wishing to indulge in scenic trails and the falls are easily accessible – it’s basically 100 metres from on-site parking. FYI: Tews Falls is only a few metres shorter than Niagara Falls.

This 15-metre waterfall is just a nearly two hour drive from Toronto. Located in Grand River, in addition to the waterfall, there’s also an opt to go tubing and/or kayaking through the Grand River rapids. You can also check out the trails that pop up after a short walk from the parking area via Rock Chapel Road. Often dubbed Rock Chapel Falls, if winter is your season there’s a lot of ice-climbing possibilities to take in too. Borer’s Falls can be seen year-round.

The cascading 19-metre waterfall is a spot to bring the family to, but it’s smart to be cautious of the hiking conditions as the rocks can be tricky to navigate depending on weather. The falls run into the Niagara Escarpment in Red Hill Valley with the top of the falls set on Mud Street.

Felker’s Falls is under a two hour drive from Toronto. There’s a small trail that glides through forest terrain and these falls also drop over the Niagara Escarpment. The hiking views are pretty cool too and at certain points you can see enclaves of beautiful homes nearby. Some people actually find themselves in people’s backyards by accident, so be warned. Felker’s Falls may not be the biggest on this list, but it is mighty.

Inglis is the most popular of waterfalls found in Owen Sound, but getting there from Toronto will take more than three hours, just so you know. People rave about the falls being easily accessible and navigating from spot to spot is a breeze. Plus, there’s a lot to see particularly in summer and winter months. It’s also great for those wishing to get super close to the actual waterfall since the trail leads you right by it. And there are rocks in the water that you can perch on a long the way, which helps when wanting to capture some brilliant stills and videos.

If small and pretty is what you’re looking for, Sherman Falls brings you to private land complete with a quaint trail, creek, and of course the main attraction: the falls. It also runs along the Bruce Trail and flows over the Niagara Escarpment. Known as “Fairy Falls” or “Angel Falls” the waterfall free-flow has two drops, giving a beautiful twin streamed waterfall. Mystical and quaint, indeed.

Webster’s Falls is a highly visited attraction that stretches 22 metres high and approximately 30 metres wide. You can check it out year-round and the waterfall is super easy to get to, specifically from parking. Expect gorgeous views and remember this is one of two waterfalls in the Spencer Gorge Conservation (Tews being the other).