Toronto’s transit system is not as good as others across Canada, according to the third annual report that grades the quality and performance of the country’s major transit networks.

The 2017 Transit Report Card of Major Canadian Regions, created by Nathan Pachal, a transit commentator and Langley City Councillor in BC, compiled and evaluated data from 23 transit authorities in six major urban regions across the country.

Topping the Transit Report Card list is Montreal, which received an A+++ in this year’s report card, followed by transit systems in Metro Vancouver and Greater Calgary, which both received an A+ grade.

The National Capital Region – Ottawa and Gatineau – and Greater Toronto and Hamilton area received C grades, which means the performance of the services in both regions are lower than expected when compared to other regions in this report.

In the GTA, the report states that the combined increase in operating cost per passenger trip, and a decline in transit service hours per capita are what resulted in its “C” grade. 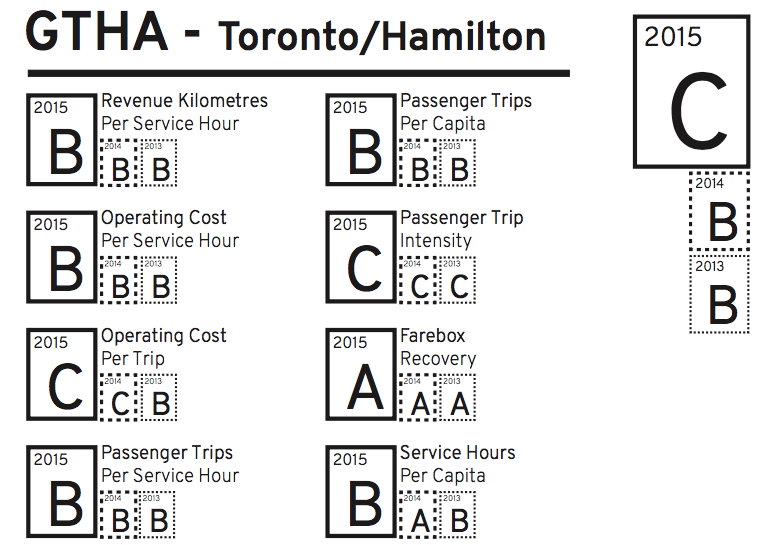 Across the board for all regions, Pachal says transit service levels have not kept up with growing demand from population growth, and there is only so much transit service providers can do to optimize services before service deteriorates.

“Overall, Canadian regions are doing more with less when it comes to delivering transit services. Unfortunately, the amount of transit service provided in our major regions is not keeping pace with population growth,” reads the report.

“This is reflected in the continued decline in service hours per capita nationwide. Due to their limited financial resources, Canadian transit agencies have reviewed how and where transit service is delivered to become more efficient. Passenger trip intensity, a measure of efficiency, has increased nationally over the last three years as a result.”

But he notes that the research in this latest report card is based on 2015 data, and with the federal government’s recent major investments in public transit, which is being matched by provinces, there should be an improvement in transit service over the coming years.

Click on the table for an enlarged version. (2017 Transit Report Card / Nathan Pachal)