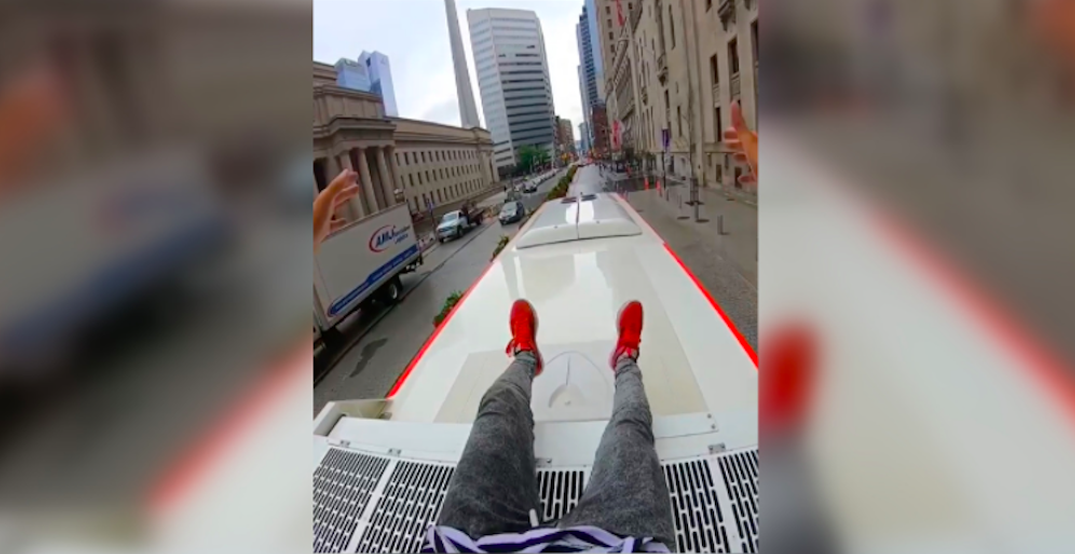 The man on top of the TTC bus. (@parkourporpoise/Instagram)

The transit commission is investigating a video of a man climbing a TTC bus and jumping up onto the top, which has gained over 4,500 views.

The video was posted two days ago on Instagram by parkourporpoise.

He can be seen easily climbing the back of the bus, easing his way to the top as he points to the CN Tower approaching, and sitting on it, right when the bus rolls by Union Station.

“I want to put my parkour skills to use and try different types of settings and concepts,” parkourporpoise told Daily Hive on Monday.

Over eight years ago he tore a ligament in his knee and was told he would never walk again. But, he fully recovered and through his videos wants to show people that anything is possible.

“Nothing is impossible you can do whatever you want in life. The videos are not about what’s physically happening. It’s all about the relation to where you are, to where you want to be. Everything is possible,” parkourporpoise said.

He said he was out walking with some friends when he saw the TTC pass by and just decided to go for the stunt — he had no idea it would be “such a big thing.”

But, he made it very clear that these stunts shouldn’t be practiced by anyone as they are very dangerous. The stuntman said that he only performs acts he’s 100% comfortable with and will only perform tricks he knows he can do after all his years of training.

According to the TTC, the incident is being investigated and there could be a $235 set fine, but likely there would be a summons to appear in court with a higher fine.

“We don’t know at this point when it occurred.”

Parkourporpoise said he has not yet been contacted by the TTC and would like to apologize to them and the police for using their time for something that is not a high priority.