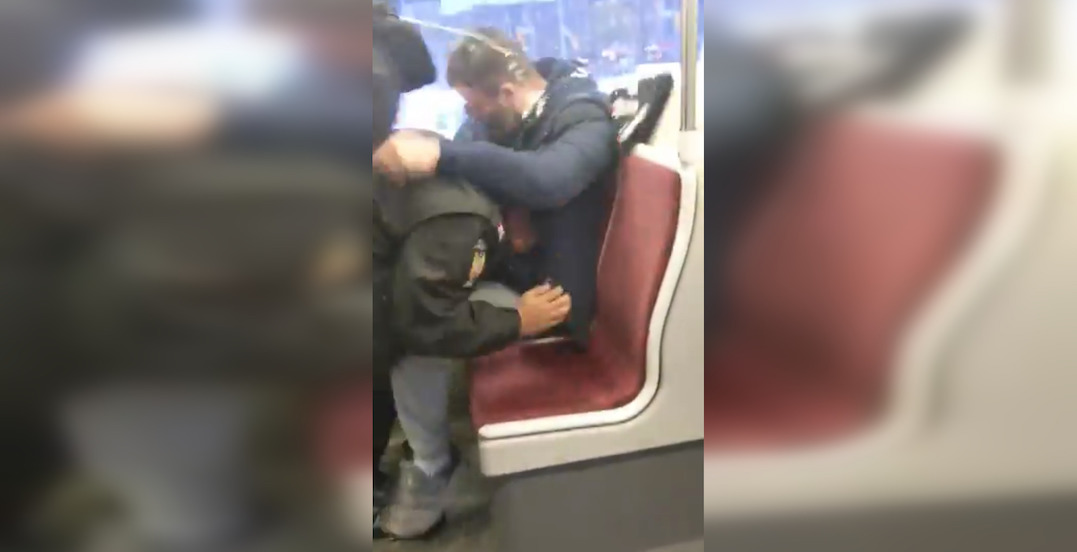 A man is facing several charges following a fight with TTC constables that was caught on video Friday morning, according to Toronto police.

At this time, neither of the involved TTC constables have been charged.

The video of the altercation was shared to social media on Friday.

In the clip, the constable appears to spray the rider with a white substance — described in the thread of tweets that follows the video as a “pepper spray foam.”

The thread also details the alleged course of the incident.

“The officers approached [the rider], asked for proof of payment, and he blew them off. They then insisted, stopped the streetcar, and as he got up they crowded in. He tried to move in the opposite direction, when then turned into mutual shoving and then punches,” reads the explanation, noting that “everything escalated in less than a second.”

Everything escalated in less than a second. Some sort of pepper spray foam was used, the man was subdued and then handcuffed. Nobody else was injured or involved as far as I can tell. /3

“I want to be clear that I am taking this issue very seriously. I have given direction to initiate an investigation by an external party,” TTC CEO Rick Leary said Friday.

When the video drew public attention that day, the TTC said it was working with the Toronto police to investigate.

“The altercation involving two TTC Special Constables took place after they were approached by several customers on board the vehicle who had concerns,” a spokesperson told Daily Hive.