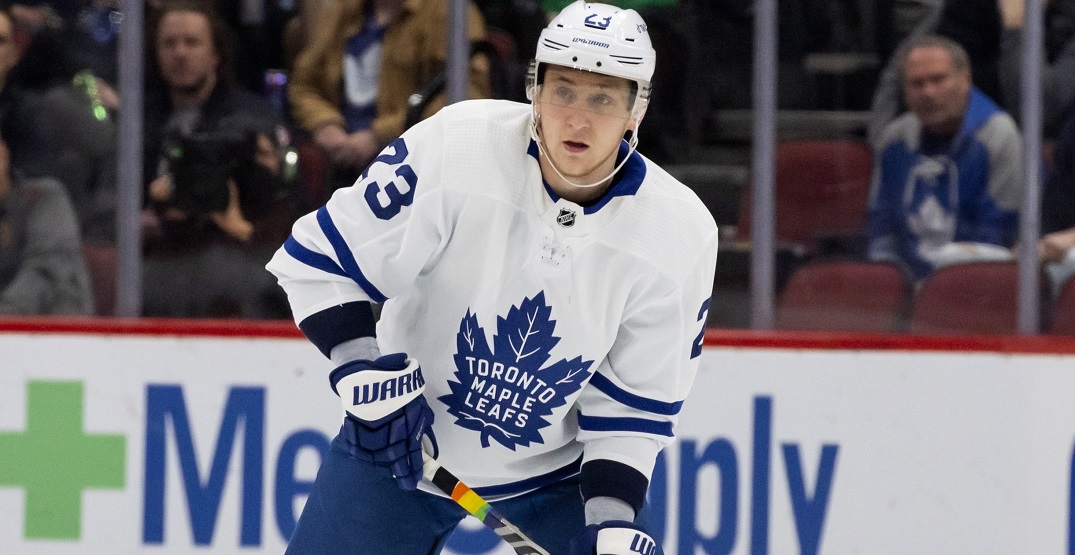 Ahead of tomorrow’s trade deadline, defenceman Travis Dermott may have already played his last game as a member of the Toronto Maple Leafs.

“I do think Dermott is going to get traded,” Sportsnet’s Elliotte Friedman said on a recent episode of the 32 Thoughts podcast. “Everybody here realizes it is time for a fresh start — team and player. Regardless of whatever happens, I think he is getting moved.”

Dermott has a goal and four assists in 43 games this season, while averaging just 14:43 of ice time per game.

Originally selected by the Leafs in the second round of the 2015 draft from the OHL’s Erie Otters, the 25-year-old Newmarket native began looking back on his time in Toronto following Saturday’s 6-3 loss to the Nashville Predators.

“It was surreal being drafted by the Leafs and all this stuff leading up to this. But how many guys play their entire career in the same team?” Dermott said. “It’s always a possibility to get moved out. Wish everything works out as well as it could, but that’s hockey.”

Dermott has one year remaining on his contract after this one, with a cap hit of $1.5 million. Projected to be a top-four defender when selected, Dermott has spent most of his career on the Leafs’ bottom pairing with a career average of 15:50 of ice time.

“I’m still dreaming from draft day. They didn’t actually call my name. This is just a five-year-long dream. You try to take it for all it is and really appreciate it,” Dermott added.

Dermott has spent his entire 251-game career with the Leafs.

“If it’s in the next week or next 10 years, whenever I’m gone, I’ll definitely be looking back on [my time in Toronto] and reminisce on some good times,” he said.

The NHL trade deadline is set for Monday at 3 pm ET, meaning Dermott will know his fate within the next 24 hours or so.