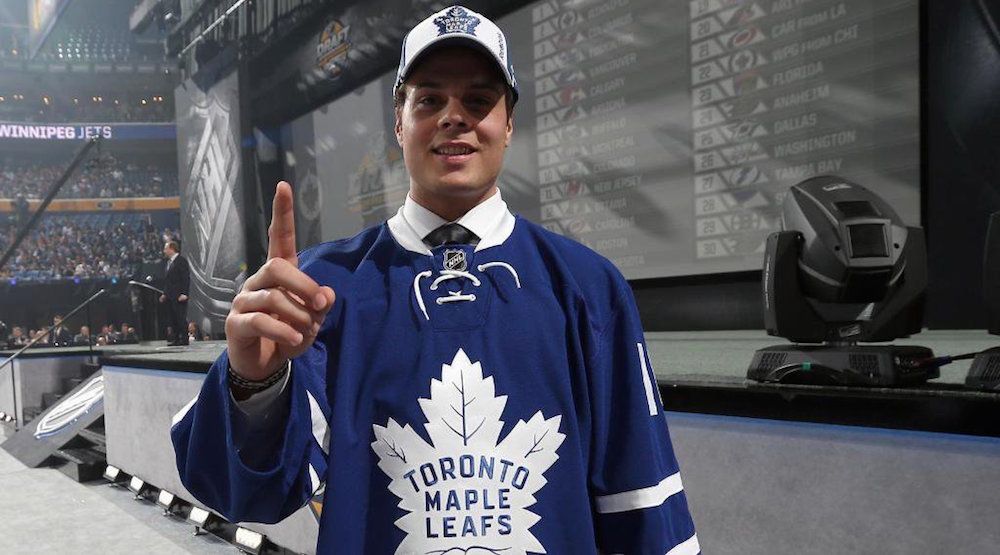 For the city of Toronto and surrounding area, 2016 was a banner year in the world of sports.

Sure, the city’s title drought in the major professional sports has now reached 23 years, but with the Blue Jays making their second consecutive appearance in the ALCS the Raptors advancing to the NBA Conference Finals for the first time in franchise history, and TFC hosting the MLS Cup Final just a few weeks ago, the present and future of sports in the city is as bright as it has been in quite some time.

So, before the dawn of this inevitable, Boston-esque type era of sports dominance, let’s reflect and count down the top 10 moments of 2016 in Toronto sports.

When Brendan Shanahan, Lou Lamoriello, and Mike Babcock began the rebuild of the Maple Leafs, they knew they were going to need some luck along the way. It’s true, they had the best odds of securing the #1 overall draft selection in the lottery so it wasn’t that much of a surprise.

But unlike the Raptors, the Maple Leafs won the draft lottery in a year with a bonafide star player available to be selected.

When the match-up for the 104th Grey Cup was set, on paper the game seemed to be a huge mismatch between the record-setting Calgary Stampeders and the below .500 Ottawa Redblacks.

A week later on a beautiful Sunday evening in November, football fans in the city were treated to one of the greatest Grey Cup games in history. The Redblacks did the unthinkable and toppled the Stampeders in overtime.

8. Donaldson’s dash in the ALDS

It was poetic justice as Rougned Odor’s right arm cost the Texas Rangers a chance at coming back against the Blue Jays in the ALDS. When his throw skipped away from Rangers first baseman Mitch Moreland, the hustle and high baseball IQ of Josh Donaldson punched the Blue Jays ticket to Cleveland for the ALCS.

Maybe the final wasn’t the dream match-up that organizers were hoping for when they planned the World Cup of Hockey, but anytime you get the best players in the world in one tournament, it makes for a compelling event.

As expected Canada took home the World Cup on the ice at the Air Canada Centre as they defeated team Europe in the best-of-three final 2-0 on the strength of super-pest Brad Marchand’s game-winning goal in game two.

Speaking of having the best players in the world under the same roof, the Vine-producing event of Toronto’s NBA All-Star weekend will go down as one of the best in history. It didn’t have the star-making effect of Vince Carter’s performance in 2000, but Zach LaVine and Aaron Gordon put on a show that will live on in YouTube highlight reels for a long, long time.

It was 10 years in the making, as the perennially underachieving squad made their first MLS Cup Final appearance in franchise history. The game itself didn’t do the league a lot of favours as the defensive-minded Seattle Sounders rarely made an attempt to win the game in regulation or extra time.

TFC carried the play throughout 120 minutes of game time but unfortunately the Reds were bested by the Sounders in penalty kicks in front of their home supporters at BMO Field.

The Raptors 2015-16 season started with expectations of advancing past the first round of the playoffs for the second time in franchise history. Those expectations quickly changed as the Raptors fought through the Pacers and Heat in seven game series and advanced to the Eastern Conference Finals to take on LeBron James and the heavily favoured Cleveland Cavaliers.

As Andre De Grasse made his way through the qualifying heats and semi-finals in Rio, the stories of him picking up sprinting in grade eleven after running the 100m in 10.9 while wearing basketball shorts and sneakers began to circulate. Little did we know the 21-year-old from Markham would come out of nowhere to become the first Canadian sprinter ever to win three medals at a single Olympic games.

You’d think the Orioles pitchers would have learned a thing or two from Darren O’Day about giving up home runs to Blue Jays hitters, but I guess not. When Buck Showalter decided against using his Cy Young candidate stopper Zach Britton in the one-game Wild Card playoff, the die was cast.

Edwin Encarnacion stepped up to the plate against Ubaldo Jimenez and created an amazing franchise moment that advanced the Blue Jays to the ALDS while simultaneously making himself millions of dollars in his upcoming free-agency.

By the time 100m freestyle finals rolled around in Rio, the 16-year-old from Monarch Park Collegiate was starting to become the story of the Olympics in this country. Proving no stage was too big for her, Oleksiak stormed back in the final 50 metres to win gold alongside American Simone Manuel while setting an Olympic record in the event.

With the heroic performance, Oleksiak became the youngest Canadian to win a gold medal, the first swimmer to win four medals at the same Olympics and a hero to many Canadians and young women.

To top her year off, Penny was awarded the Lou Marsh Trophy as Canada’s top athlete.