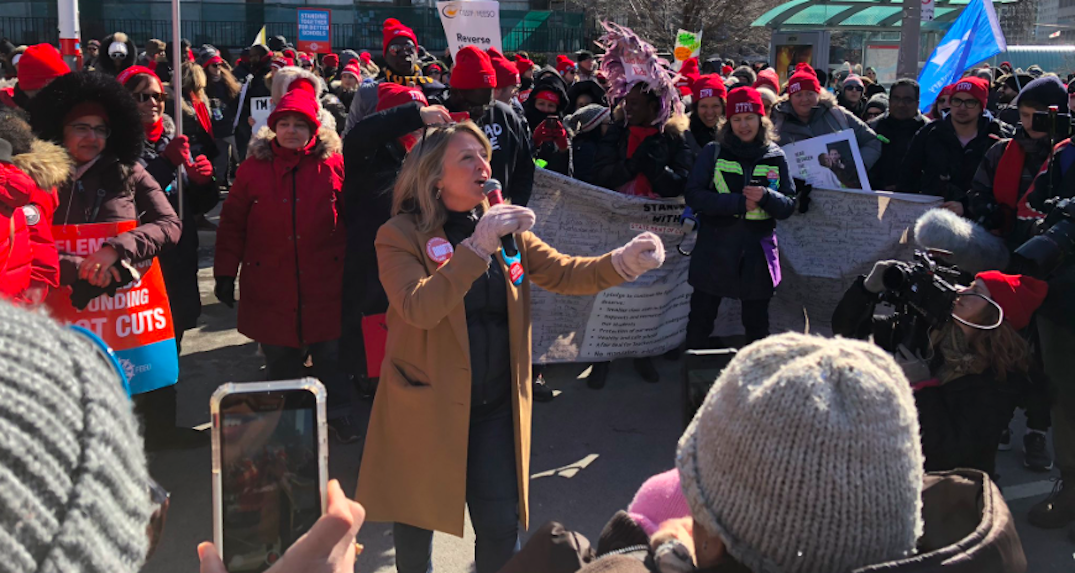 Around 30,000 teachers are currently gathered in Queen’s Park to protest the Ford government’s cuts to public education.

The Elementary Teachers of Toronto (ETT) tweeted a video showing the teachers in action, asking Ontario Premier Doug Ford for a “fair deal for students and teachers.”

Joy Lachica, the ETT president, said that the teachers will not “back down in our fight for the future of public ed in Ontario.”

NO CUTS TO EDUCATION!#ETT President Joy Lachica (@lalalalachica) tells @fordnation & @Sflecce to #ReverseTheCuts & that the 30,000 educators here at Queen’s Park taking action, & 200,000 province-wide, will not back down in our fight for the future of public ed in Ontario. pic.twitter.com/S6YBJZTNNH

Another notable voice in the protests was, Merit Stiles, an MPP for Davenport and self-declared critic of the education cuts telling the crowd outside the legislature, “I’ve never seen Queen’s Park more beautiful than today.”

The teachers can be seen chanting “we won’t back down” in videos that have been shared on Twitter.

Look at this! This is how we stand up united for Quality Public Education in Ontario. Our students are worth it! We fight for #SpecialEducation, Smaller class sizes, Safer Classrooms, NO E-learning! @ETFOeducators@ElemTeachersTO @OECTAProv @AEFO_ON_CA @osstf #ontedstrike pic.twitter.com/Y5pHkMZWkb

Sam Hammond, the ETFO President said he was proud to walk the picket line at Queen’s Park this morning.

The strike in Toronto is part of a larger province-wide walkout happening with Ontario’s four major teacher unions on Friday.

Around 200,000 teachers and education workers, across 72 school boards, affecting 5,000 schools are protesting.

The strike has been ongoing for over a month, with the primary concerns for teachers being increased classroom size, expansion to online learning, funding cuts to special education, hiring teachers with seniority, and improved salary compensation.

“While union leaders are continuing to organize further disruption, our government remains focused on getting deals that ensure students are learning each and every day,” Stephen Lecce said, Minister to Education said in a statement ahead of Friday’s strike.