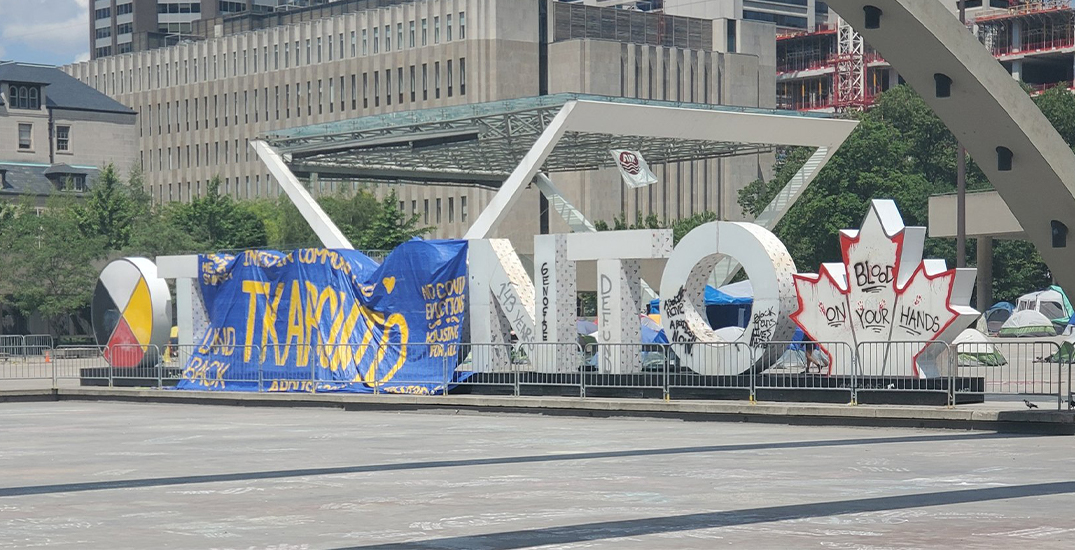 The Toronto sign in Nathan Phillips Square has been vandalized.

Chief Communications Officer for the City of Toronto, Brad Ross, told Daily Hive that the City is cleaning graffiti off of the sign on Tuesday morning.

He did not confirm when the sign was vandalized.

“On Friday, June 19 (Juneteenth), a group called ‘Afro-Indigenous Rising Collective’ organized a sit-in/protest on College Street in front of Toronto Police Headquarters. The group made their way down Bay Street to Nathan Phillips Square, where they have camped overnight since. The City continues to monitor activities at City Hall and Nathan Phillips Square, with the safety of the public and staff as its priority,” Ross said.

Afro-Indigenous Rising posted on their Facebook page on June 20 saying that they were occupying Nathan Phillips Square “in protest of the police.”

The messages written on the sign appear to be a form of protest against anti-Black racism and in support of the defunding of the police.

Photos of the vandalism have been posted on social media. The photos also show messages that appear to be written in chalk all over the square.

oh wow this is POWERFUL
the toronto sign and the entire square is covered in messages to defund the police !! pic.twitter.com/VdqtlIhjTj

According to the City of Toronto, the 3D Toronto sign was installed in July of 2015 for the Toronto Pan American/Parapan American Games.