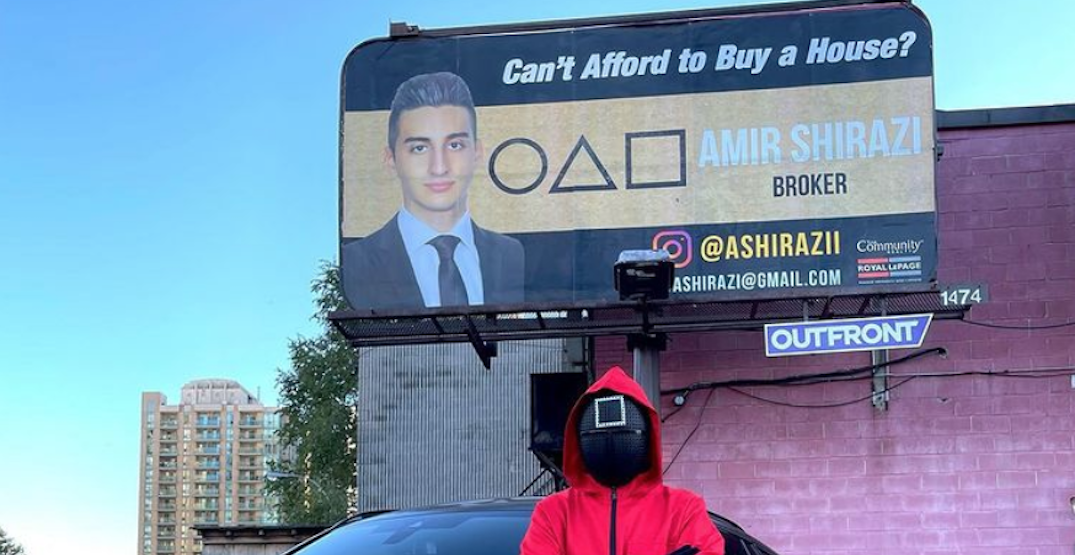 There’s a lot that people will do to be able to afford a house in Toronto, but playing a deadly round of Squid Game? That might be a bit too far for some.

One Toronto realtor took the idea and ran with it, creating a Squid Game-inspired billboard poking fun at how unattainably high Toronto home prices are. Amir Shirazi, a realtor with Royal LePage Your Community Realty, posted the billboard above a parking lot across from Finch station.

It features the design from the iconic business card given out in the Netflix hit show that invites players to compete in the high-stakes games where they can potentially take home tens of millions of dollars. “Can’t afford to buy a house?” Shirazi’s ad asks above the business card.

Shirazi dressed up in a hooded Squid Game guard uniform and took a picture in front of the billboard to post on his Instagram, along with the caption “Let’s play a game.”

This isn’t Shirazi’s first unusual billboard either. Late last year, he posted another one, in the same location, that read “Your Shorty’s Realtor. ❌🧢” along with the caption “no cap tho.. i really do this.”

With how competitive and fast-paced the Toronto real estate market is right now, it helps to have every attention-grabbing advantage you can get.