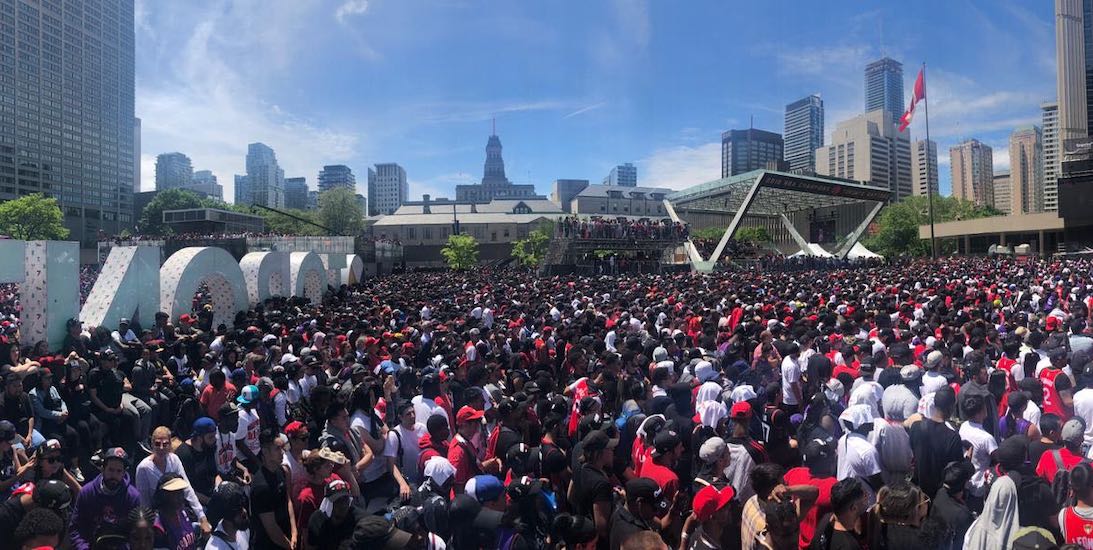 During one of the most celebratory days in Toronto history, chaos unfolded at Nathan Phillips Square after gunfire broke out.

As hundreds of panicked fans ran to safety, the Toronto Raptors play-by-play announcer, Matt Devlin, calmly took control of the crowd and announced “a situation” and called for a brief suspension of the Raptors’ NBA Championship celebrations on Monday.

“I want to make sure everybody stays calm right now,” said Devlin, adding the situation was close by and “serious.”

Devlin, who was MC’ing the Raptors’ victory rally, was referring to a shooting that left multiple people with serious but non-life threatening injuries.

“Everybody just stay here, stay together. We’re here to celebrate, which we will but I just want everybody to just take a moment and stay strong,” said Devlin to a jam-packed square at Toronto City Hall.

“There is an emergency that is being dealt with.”

Following the incident, countless people took to Twitter to thank Devlin for handling the crowd so calmly.

Scott Reid, a former political advisor, also praised Devlin for how he took control of the situation, calling how he handled it “impressive.”

“Giant props to @Matt__Devlin who, by definition, could not have known what was in motion but had the steel and professionalism to deliver that message, striking just the right balance. With the team, the city, and the world watching. Impressive.”

Police say they have since made three arrests and recovered two firearms, and have identified four victims with injuries related to the shooting.

With thousands packed in the Square, police are now looking for any footage to help with their investigation.

“I can tell you there were well over 100,000 cameras that were all rolling in 4k and 1080p quality,” Toronto Police Chief Mark Saunders said on Monday. ” I need them right now to help answer those questions. Lots of people saw this – it didn’t happen in a vacuum.”

Anyone with photos or videos from in and around the area at the time of the shooting is asked to upload to the Toronto Police website.