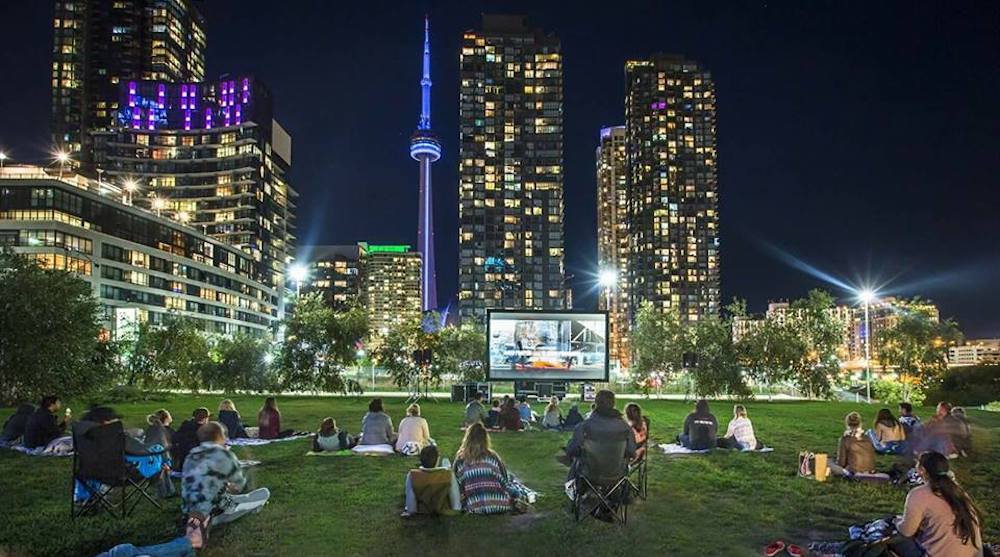 Grab your blankets, snacks, and bikes, and get ready for outdoor movie season, Toronto!

Across the city, screens are ready to go up for annual free movie viewing experiences. The summer series fall on different days and in different locations, but we got you covered.

All the nights below are free and ready for your enjoyment.

The Toronto Outdoor Picture Show is kicking off its opening weekend at Fort York with Thelma & Louise, who set out on a weekend getaway before things go horribly wrong. The next day you can enjoy Misery, Rob Reiner’s psychological horror about a famous author who is rescued from a car crash by his “#1 fan.” Don’t miss out.

Christie Pits Film Festival will kick off its new season on Sunday, June 30, though the film list has yet to be announced. The film festival will conclude on August 25, and if you’d like to stay ultra up-to-date with the movie pickings, you can keep tabs on the festival’s newsletter. As part of the Toronto Outdoor Picture Show, you can anticipate movies of the “Dynamic Duo” theme this year.

For the first year, the Toronto Outdoor Picture Show will be offering screenings at Bell Manor Park. The Dynamic Duo theme stretches to this location as well, and a full list of films is soon to be announced.

When: Beginning August 8 and runs until August 22
Where: Bell Manor Park, 1 Bayside Lane

This marks the fourth season of outdoor films at Corktown Common Park and this summer, also under the Toronto Outdoor Picture Show umbrella, the public is invited to enjoy a series of films focusing on Dynamic Duos at this location, too!

Open Roof Festival will be back for its tenth season this June, and the festival will enjoy its second year at a new venue. Starting June 19, Open Roof Festival will feature live music and film screenings with food and drinks. And remember: the event has moved from Sudbury Street to Sterling Road in the Lower Junction Triangle near the new site of MOCA (Museum of Contemporary Art).

When: Beginning June 19 and runs until August 22
Where: Sterling Road in the Lower Junction Triangle (the lot adjacent to 158 Sterling Road)

Starting in July, Under The Stars returns to Regent Park for the sixth year in a row, showing widely-loved films that prominently feature Indigenous, Black, and People of Colour on screen. Each week, there will be a pre-show before the film with family-friendly activities that change week to week.

When: Beginning June 10 and runs until August 14
Where: Regent Park, 585 Dundas Street East

Movie Nights are back for 2018! Join The Beach Village for Movie Nights in the Park every Wednesday starting July 4 – August 29. Movies screenings will rotate between Kew Gardens and Ivan Forrest Gardens Park. As always, admission (and popcorn!) is FREE! Come out and experience movies under the stars.

When: Wednesdays in July and August
Where: Kew Gardens and Ivan Forrest Gardens Park

Toronto’s Sorauren Park will be hosting free movie screenings this summer, with showings happening the fourth Saturday of every month from June to September. Last year, attendees enjoyed pizza dinners before each screening from the Sorauren Park Pizza Oven, prepared and presented by Pizzeria Defina. Fingers crossed the same happens this year!

When: Fourth Saturday of the month, June 22 to September 28
Where: Sorauren Avenue Park, 289 Sorauren Ave

New to the city this year, Toronto’s shipping container market stackt will be screening outdoor movies on their grassy lawn. Peruse through the shipping container shops, enjoy some Belgian Moon and then enjoy a free film, starting with John Wick 2 on May 14.

When: Beginning May 14, running dates TBA
Where: stackt, 28 Bathurst St

Every Wednesday from June 5 to July 24, the Union Summer Market will be hosting movie screenings at its outdoor licensed garden patio. The screenings will begin with Bohemian Rhapsody and end with A Star is Born. Bring tissues.

Unconfirmed (but hopefully returning this summer)

In previous years, CityPlace Fort York BIA began hosting a movie night once a month up until September. Hopefully, the monthly gathering returns this summer! We’ll be sure to update you once the dates are confirmed.

Humpdays in the city were always a little sweeter with Free Flicks. The popular Harbourfront series has previously run from June until August, but no announcements have been made regarding this year’s event at this time.