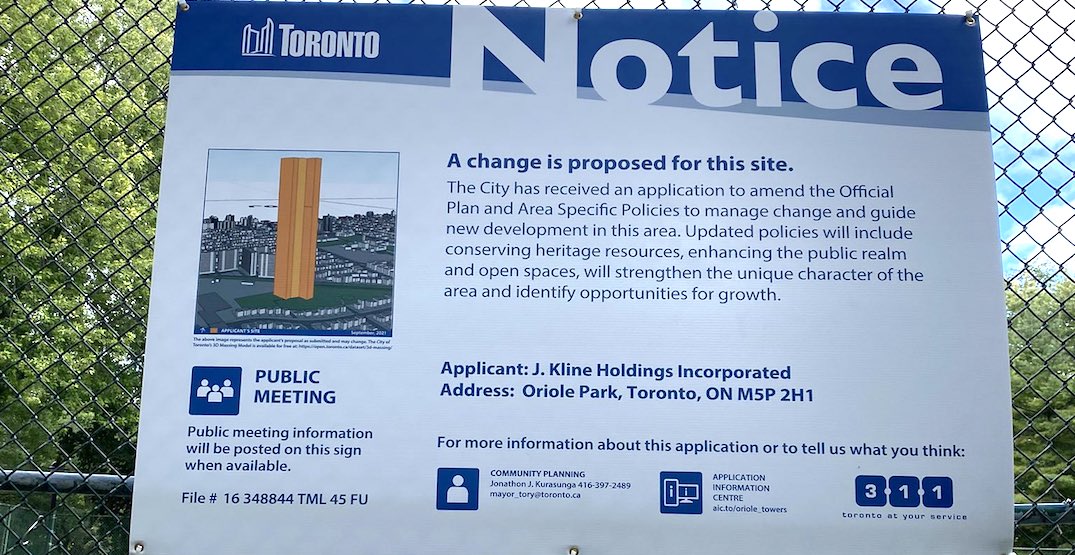 In what has become a head-scratching mystery, a Toronto City Councillor is looking to find the culprit behind a fake development poster that recently went up in a local park.

The poster, hung on a fence in Oriole Park, looks deceptively real with the same layout as the typical development notices that can be seen around the city. It claims that a developer named J. Kline Holdings Incorporated has filed an application with the City to build a massive high-rise tower on the park site. The poster even has a realistic-looking rendering and an official website listed.

The developer’s name, application number, rendering, and website, however, are all fake.

City Councillor Josh Matlow says he was first alerted to the issue when he was told about flyers speaking out against the fake development that had been posted around the park.

“I went over there to take them down because someone [was] lying about a massive tower in a public park, so I didn’t want the community to be scared about someone that’s lying to them,” Matlow told Daily Hive.

This is really bizarre. This is a first. Someone has created a fake development notice, pretending a condo tower is being proposed in the middle of Oriole Park. It’s not true. I’m trying to figure out why someone went through the effort of scaring the community like this. pic.twitter.com/OY07J0Jyx5

Once there, a resident showed him the possible source of confusion: the fake development notice.

The anti-development flyers, however, are equally suspicious, and it’s unclear whether they may have come from the same prankster. They claim that the development is set to be 88 storeys — a detail not given on the fake notice — and have an alleged quote from Mayor John Tory that the development is a “done deal.” They also encourage people to attend a “town hall” on September 23 at The Bull: A Firkin Pub location at 1835 Yonge Street, mis-typed on the poster as The Bull and Firkin.

The Bull: A Firkin Pub confirmed to Daily Hive that they have no awareness of any such town hall.

Matlow says he is looking into the puzzling posters that left many community members confused.

“I’ve never seen anything like this before and I imagine it would have cost somebody money to get this printed,” Matlow said. “We’re going to do everything we can to investigate and understand why somebody went through the effort of doing this. I don’t like my community being lied to and that’s what’s upsetting me the most. In the times we’re in, people have enough to be upset about.”

It is unclear whether the person behind the posters, if caught, would face any fines or repercussions.