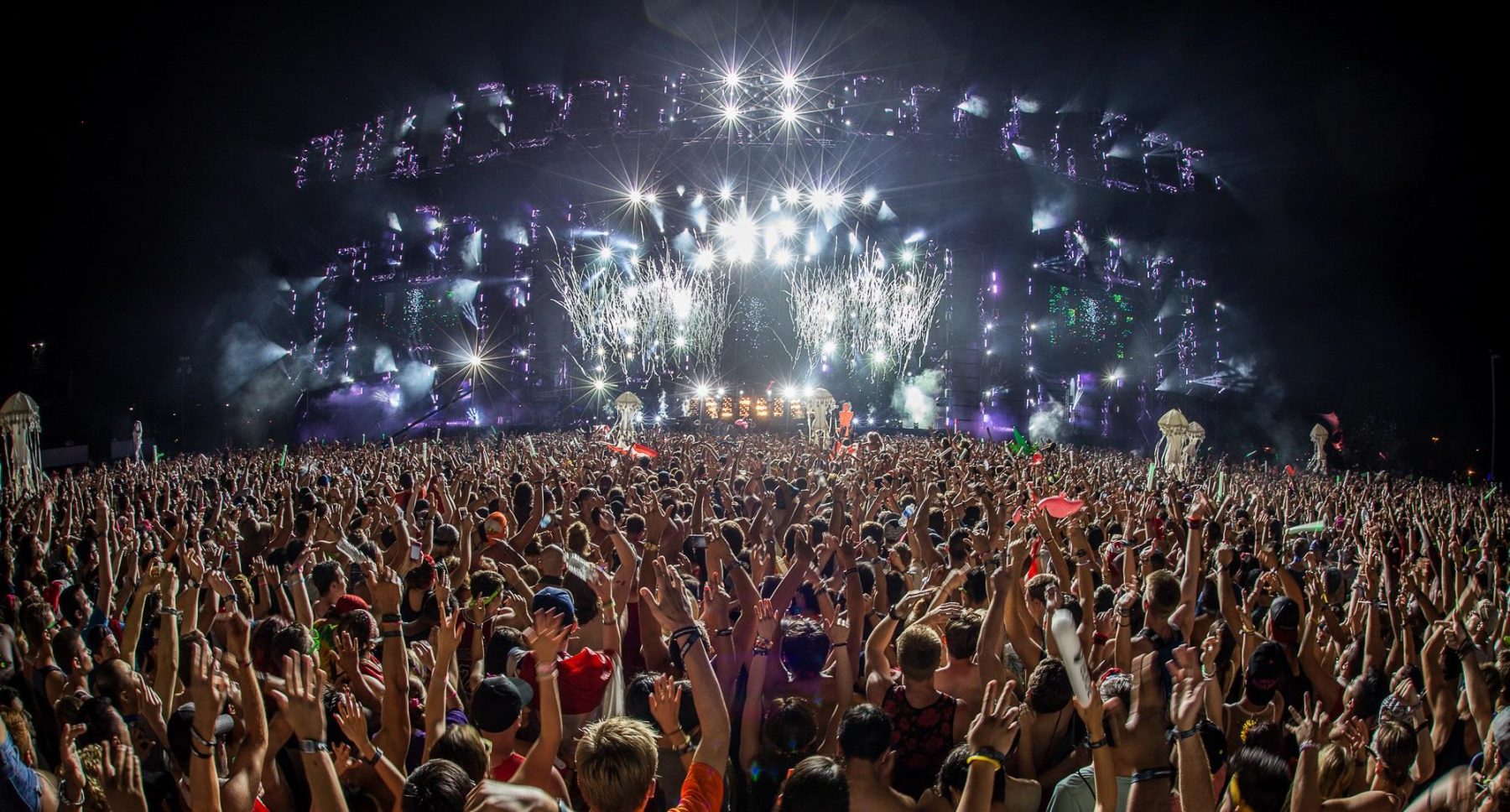 So you missed Bestival. No need to sweat (well, you probably will sweat), ’cause there are a ton more music festivals on the horizon.

Because you can’t spell summer without music festival… And flower crowns.

Here are 17 Toronto music festivals you’ll want to hit up in summer 2016.

One of Toronto’s annual summer attractions is the TD Downtown Toronto Jazz Festival, with more than 1500 musicians and 350 concerts. Check out a free concert, or one of the headlining shows, across the downtown core and surround yourself by thousands of other live music lovers.
Where: Various venues downtown Toronto
When: June 24 – July 3
Tickets: Available online for passes and individual tickets

Start July off with one of the city’s largest electronic fests. Headliners at this year’s Digital Dreams include the electronic godfather himself, Armin Van Buuren, as well as Above & Beyond, Bassnectar, and Knife Party. With Toronto’s beautiful shoreline playing host to the festival, you’ll bask in the sun to great tunes, while admiring the 6ix’s skyline. Flower crowns optional.
Where: The Flats at Ontario Place, 909 Lakeshore Blvd West
When: July 2 – 3
Tickets: Festival passes available online from $175

Toronto’s concert and picnic series is back in its fourth year, with a massive curated line up that spans over four months. With its next concert scheduled for July 1, Electric Island ends this year’s series with the Labour Day festival.
Where: Toronto Islands, accessibly via the Toronto Island Ferry at 9 Queens Quay West
When: July 1, August 1, September 4 and 5.
Tickets: Available online from $50.84.

An annual Beach tradition in Toronto is summer and jazz. And this year is no exception, as the Beaches International Jazz Festival returns to Woodbine Beach. The month long celebration is more than just the music now, with community events, food, and streetfests. Over 45 bands will be playing, on the various stages in the neighbourhood. Head down for date night or family day.
Where: Woodbine Park and Jimmie Simpson Park, Queen Street East
When: July 2 – 24
Tickets: Free

The TD Irie Music Festival is a multi-venue summer music festival celebrating African-Canadian culture. Starting on July 8, and continuing on weekends until July 31, the Irie Music Fest has been a local collaboration with the Toronto Urban Music Festival since 2002. Think reggae, dancehall, and rum. There’s also a boat cruise party!
Where: Various venues
When: July 8 – 9, July 17, and July 30 – 31
Tickets: Available from $10 – $40.

Organized by Music Africa, Afrofrest is Toronto’s largest celebration of African music, heritage and culture. This year, Afrofest celebrates its 28th Anniversary, and will include musicians, artists, and vendors. This is a free event in one of our favourite parks.
Where: Woodbine Park, 1695 Queen Street East
When: July 9 – 10
Tickets: Free

Because Toronto is a multi-musical city, the Toronto Summer Music Festival is the city’s largest classical music event of the summer. Presenting different themes, this year, the festival is all about the portrait of the musical traditions in Great Britain – meaning classical music ranging from the baroque to 20th century Brit pop. Get your classical on!
Where: Mostly Koerner Hall, 273 Bloor Street West
When: July 14 – August 7
Tickets: Available online from $20. Festival passes also available.

The four day Unity Festival celebrates hip-hop in its diversity. From beatbox, to dance, and MC/spoken word, this is truly a one of a kind event in Toronto that ends with a Unity Concert. Artists this year include DAM FUNK, Zaki Ibrahim, The Soul Motivators and more. Check out the official kick off on July 20, and hang til the celebrations end on July 23.
Where: Super Wonder Gallery, 876 Bloor Street West
When: July 20 – 23
Tickets: Generally $10 available at the door

Back for its second year, the very fun multi-day arts and music festival is everything we crave about summer festivals. The WayHome Music & Arts Festival is fast becoming one of the largest festivals in the region, all due to its wicked vibes, and incredibly diverse line ups. From the beats of Chet Faker, to the killer sounds of – um – The Killers, and the dance drops of Major Lazer, WayHome has it all in terms of music, camp settings, food, and atmosphere.
Where: Burl’s Creek Event Grounds, 180 8th Line South, Oro-Medonte
When: July 22 – 23
Tickets: Festival and day passes available online from $109.99

October’s (or as we like to say, our) Very Own, Drake’s very own Fest returns for its seventh year. Already sold-out, this year’s OVO Festival is interestingly placed in between Drake’s Summer Sixteen tour with Future. Along with the OVO crew, Snoop Dogg and Wiz Khalifa headline Saturday’s event, which leaves us wondering who this year’s special guests will be… If it’s Kanye, we called it.
Where: Most days at Air Canada Centre, 40 Bay Street
When: July 29 – August 1
Tickets: Sold out. (It’s called Craigslist, people.)

You really don’t need to fly south to hear and experience the Caribbean culture. During the Toronto Caribbean Carnival, turn up the heat at the multi-day Island Soul festival. The mix of dance, music, visual arts, film and cuisine is a great way to wrap up Carnival. This year’s artists include Miami’s T-Vice, Jah9, and Juno Award winner Exco Levi.
Where: Harbourfont Centre’s concert stage, 235 Queens Quay West
When: July 29 – August 1
Tickets: Free

One of the city’s fave summer festivals, Veld is back to take over Downsview Park at the end of July. With electronic heavy hitters like Flume, The Chainsmokers, and our very own Deadmau5, this is definitely one of the most anticipated electronic shows this summer. Lets not forget Post Malone, Travis Scott, Matoma, and Netsky. And also remember to bring your sunscreen.
Where: Downsview Park, 35 Carl Hall Road
When: July 30 – 31
Tickets: Available online from $159.50

A one-day awesome mid-summer jam, Time brings us some international and some local babes over two stages. From electro-act Broods, to Joey Bada$$ and Chrome Sparks, Time is sure to be a good time. And it’s especially awesome for those who want a one-day city festival experience. Don’t miss some local faves including Bob Moses’ live set, and CRSB.
Where: Fort York Garrison Common, 250 Fort York Blvd
When: August 6
Tickets: Available online from $20 – what a deal!

No summer is complete without at least two flower crowns at the Mad Decent Block Party. Diplo’s annual summerjam heats up the city with Vancouver’s beloved Sleepy Tom, Marshmello, Louis the Child, and Grandtheft. Of course Diplo, too. This is an 18+ event, and we were just kidding about the two flower crowns. One will do.
Where: Fort York Garrison Common, 250 Fort York Blvd
When: August 19
Tickets: Available online from $46.50

Curated by Wavelength Music, the festival showcases collaboration between the independent music and arts scenes. The very grassroots collective usually organizes about 20 events per year, including Camp Wavelength. Taking place on Toronto Island, this is a good ol’fashion camping weekend among great music and art installations.
Where: Toronto Islands, accessibly via the Toronto Island Ferry at 9 Queens Quay West
When: August 19 – 21
Tickets: Available online starting at $55

Since 2010, the Toronto pedal powered mobile music festival has been providing free festivities in partnership with Cycle Toronto. Tune your bike, hang out, dance and enjoy the music of Jason Collett and Nhapitapi. The event is family friendly, and bound to get you in gear for the fall. (See what we did there?)
Where: Prairie Drive Park, 70 Prairie Drive
When: September 10
Tickets: Free

September is part of summer in the six, its no wonder these September festival line ups are so hot. The Toronto Urban Roots Festival’s line up includes James Bay, Death Cab for Cutie, Jimmy Eat World (YES, “The Middle” guys!), Explosions in the Sky, Jake Bugg, The Sheepdogs, and so much more. Forget fall, and have an extending music festival season at TURF.
Where: Fort York, Garrison Common, 250 Fort York Blvd
When: September 16 – 18
Tickets: Available online starting at $175

* Please note: no flower crowns were harmed while writing this festival piece. Though they were definitely worn.