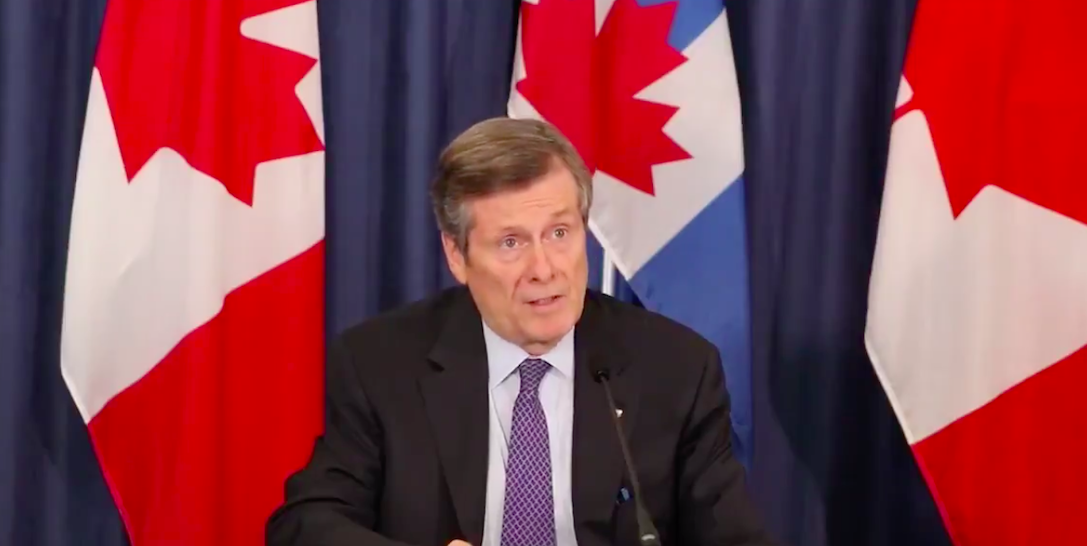 After Ontario Premier Doug Ford confirmed that he had been in contact with MLSE about Toronto potentially being a hub city for possible NHL games this summer, Toronto Mayor John Tory expanded on the possibility.

“They’re coming up with a game plan, as the NHL, as a whole,” said Ford. “They haven’t really divulged anything else as of yet. But we have been in conversation.”

While it still remains unclear if the NHL will be able to complete the 2019-20 season, plans are being put in place as contingency. The league is currently looking at staging games in four cities, representing the NHL’s four divisions, this summer.

Toronto is rumoured to be an option for the Atlantic Division.

“There have been some very preliminary, very high level contacts with respect to the possibility of some hockey games being played here, but it’s something that hasn’t been finalized by the National Hockey League,” said Tory. “Certainly, MLSE are very mindful of the fact that there would have to be substantial public health considerations taken into account as to the possibility of those kinds of games being played here in Toronto.”

The NBA, meanwhile, is looking to open practice facilities in the near future for individual workouts, but approval will differ from city to city. The league is hopeful that it can complete its season too, with Disney World reportedly being considered as a venue for all 30 teams.

“With respect to the Raptors, it is joint decision-making that is taking place between the Government of Ontario and the City of Toronto. Those things are moving forward quite nicely and I expect that there’ll be some news to report on that in a way.

“Again, that is going to be consistent with making sure that our team and our players can not be put at a competitive disadvantage, but at the same time, respecting completely the imperatives that we have with public health and stopping the spread of COVID-19.”

Unprompted, Tory also provided an update on the Blue Jays about playing games in Toronto or elsewhere — presumably south of the border.

“Similarly, I’ve been contacted by the senior executives of the Toronto Blue Jays, who are looking for some information at a very initial, preliminary level with respect the possibility of the Blue Jays, at some stage, obviously depending on upon information that has to do with the border and quarantines and public health, possibly being in a position to play some games, whether it’s here or elsewhere.

“All of these things are under our act of consideration because these sports teams have approached us, and we will let people know as soon as there are decisions that are made, but always placing public health first.”