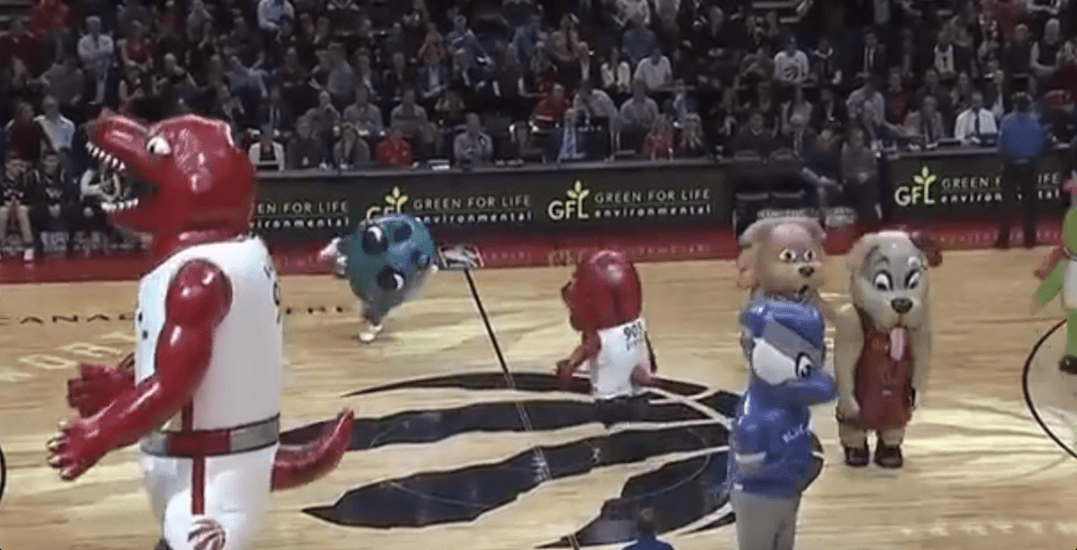 Last night, the Toronto Raptors earned their sixth straight win with a 115-112 victory over the Miami Heat.

And no, seeing the 1st place team in the Eastern Conference win on home court wasn’t the highlight of the game, not if the Toronto Raptor’s mascot had anything to say about it.

You see, last night’s game marked the mascot’s 1,000th home game with the franchise, and the Air Canada Centre threw the Raptor one hell of a party.

From Raptors past to Raptors present.

And while there were plenty of memories replayed on the jumbotron, the most memorable part of the evening was the fact that not only all of Toronto’s team mascots were in the building, but mascots from a number of other NBA teams as well.

If you’ve ever watched the Raptors play on home court you know that no game is complete without an epic mascot dance party.

And in true Raptors fashion, all mascots, including the Cleveland Cavaliers’ Moondog and Harry the Hawk from the Atlanta Hawks, hit the court in ridiculous inflatable suits to get down.

The result? Nothing short of hilarity.

If you’re looking for a laugh today, let this be it.

What happens in Toronto… 🤔pic.twitter.com/B6GPwS4tPZ