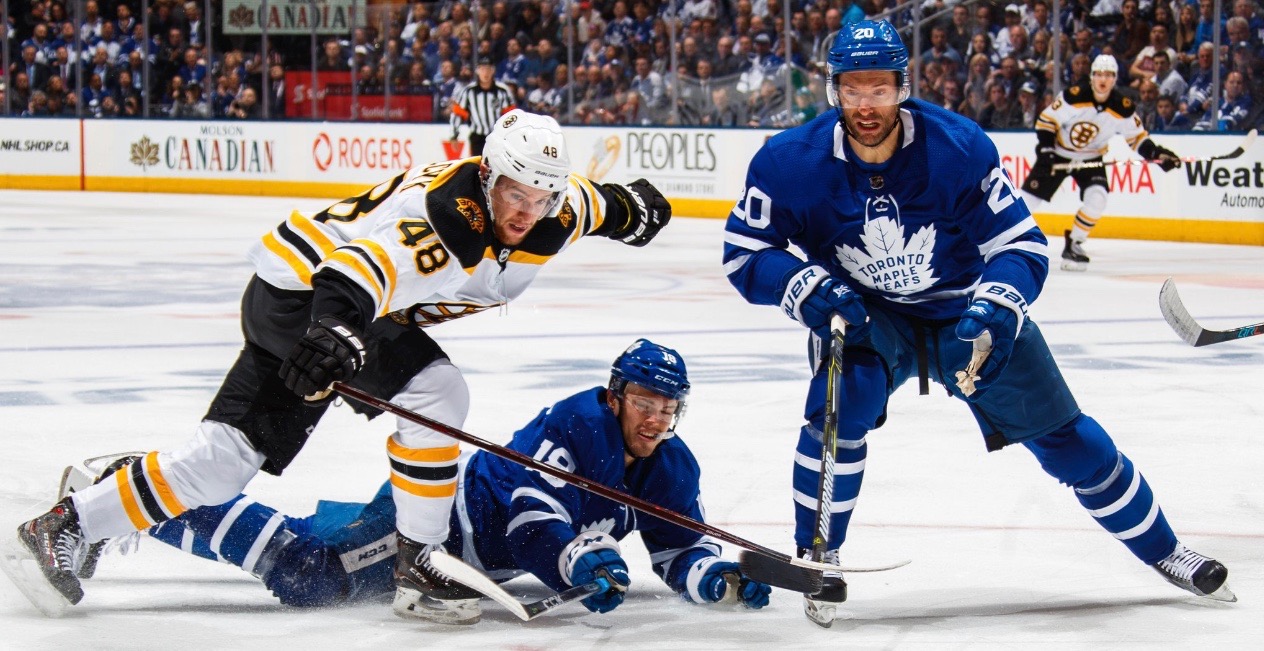 With a loss in Thursday night’s Game 4 in their opening round series against the Boston Bruins, the Toronto Maple Leafs have seen their season pushed to the brink. Now trailing 3-1 in the best-of-seven matchup, they face the near-impossible task of having to win three games in a row to capture the series and keep their season alive.

Toronto didn’t look like themselves in the opening two games of the playoffs, getting trounced 5-1 and 7-3 respectively. But perhaps the 3-1 scoreline on Thursday night was the biggest gut-punch of the postseason so far, as the Leafs had the chance to even up the series at two games apiece on home ice and were unable to take advantage of the opportunity.

The biggest break they’d catch came less than an hour before the game, when it was announced that the Bruins’ top-line centre, Patrice Bergeron, would not be in the lineup.

The news came as a fairly large surprise, considering Bergeron was on the ice for the team’s morning skate and had no obvious signs of injury at the end of Game 3. With Leafs centre Nazem Kadri serving the third and final game of his suspension, Bergeron’s absence saw both teams without one of their best players.

However, Boston’s Torey Krug scoring just 28 seconds into the first period erased any thoughts that the matchup would be an easy one.

Tomas Plekanec became the seventh Leaf to score in the series, tying the game at 1-1 a little under than eight minutes into the game. Acquired a day before the trade deadline after playing his entire career in Montreal, Plekanec’s goal was his first as a Leaf. Mitch Marner managed a pass from his knees to the slot, where Plekanec would find the net on a one-time effort.

Unfortunately for Toronto, that’d be the high point of their evening, as beyond that there wasn’t much to celebrate.

Brad Marchand and Jake DeBrusk answered for the Bruins, scoring a goal in each of the second and third periods to push the victory in Boston’s direction.

Toronto certainly had no shortage of opportunities, outshooting Boston 31-22.

While the game was still 1-1, Toronto generated a number of chances on the game’s only power play late in the first period. In the second period, Marner saw a breakaway stopped by Tuukka Rask.

But following the game, it was an not an action on the ice, but rather an inaction from the face of the team, Auston Matthews, that began grabbing headlines.

Talking to the media is an expectation, but usually made into a bigger deal than it should be when a player declines to do so. There’s no real correlation between anything Matthews could’ve said that would give Toronto a better chance in their next game.

Meanwhile, Leafs’ head coach Mike Babcock had this to say about Matthews:

Babcock on Auston Matthews: "I'm assuming that he thought he was going to come tonight and dominate the game; that's what I thought. I thought the same with Willy. That didn't happen."

As is usually the case, Babcock’s intent isn’t always clear, whether he’s genuinely disappointed with two of his best forwards’ performance, or just looking to light a fire under them for game five. But the facts remain the same: through the four games of the series, Nylander and Matthews have combined for just a goal and an assist.  If the Leafs have any faint hope of winning this series, they’ll need better production from their two top-line forwards.

Thursday’s loss didn’t cement the Leafs’ fate this season, but it sure made their chances of postseason success quite a bit harder. With Game 5 of the series set for Saturday night in Boston, it’ll take a gigantic effort to come out on top.