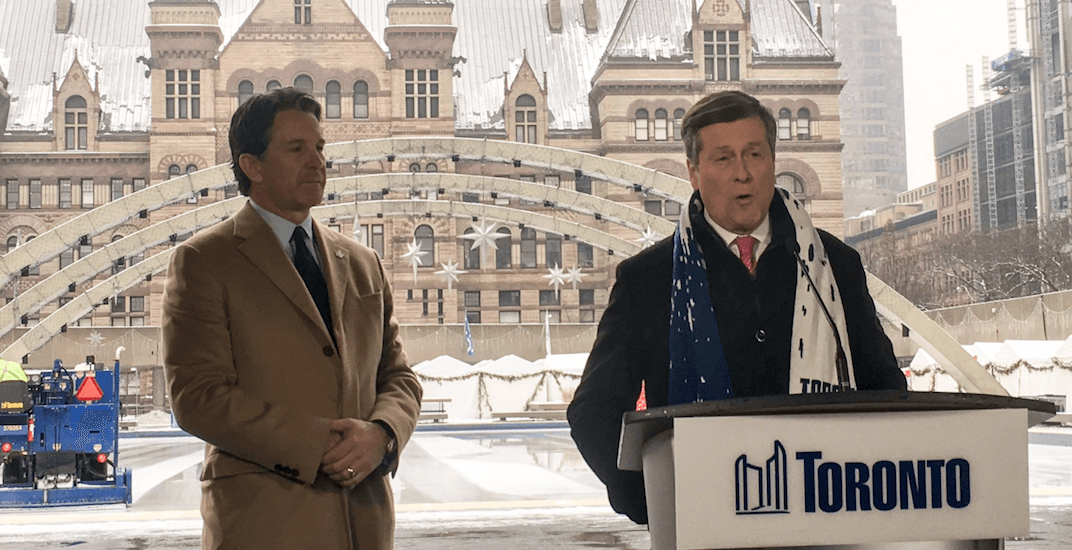 After the Argonauts and TFC had the spotlight on them recently, the Toronto Maple Leafs will get their day.

No they don’t have a championship to celebrate, they’re literally going to get their own day, mayor John Tory proclaimed. Leafs president Brendan Shanahan was on hand at the announcement to accept the honour on behalf of the team.

Other recent proclamations from the mayor include ‘Reds Day’ for Toronto FC on December 11, as well as ‘Double Blue Day’ for the Argos on November 26.

WHEREAS sports teams have a remarkable ability to kindle passions and bring together residents of a city. The Toronto Maple Leafs have been able to unite Torontonians in their love of hockey since 1917. Today on the 100th anniversary of the Toronto Maple Leaf Hockey Club, we acknowledge the history of the storied franchise and reflect upon the tremendous impact that the team has had on the City of Toronto and the game of hockey.

I encourage Leafs Nation and residents of Toronto to take the day to celebrate the Leafs 100th Birthday as we look forward to the exciting future of our beloved Maple Leafs.

The City of Toronto is extremely proud of its Maple Leafs and we celebrate this milestone with them.

NOW THEREFORE, I, Mayor John Tory, on behalf of Toronto City Council, do hereby proclaim December 19, 2017 as “Toronto Maple Leafs Day” in the City of Toronto.

The Leafs will play a rare weekday matinee at home on Tuesday, playing a 2 pm game to match the exact time 100 years ago.

As a life-long Leafs fan, I am excited by the team’s chances this year. Tomorrow is the 100th anniversary of our beloved Toronto Maple Leafs. I am officially proclaiming December 19th as Toronto Maple Leafs Day. #TMLTalk #nhlnext100 pic.twitter.com/bZNc3xAHxS