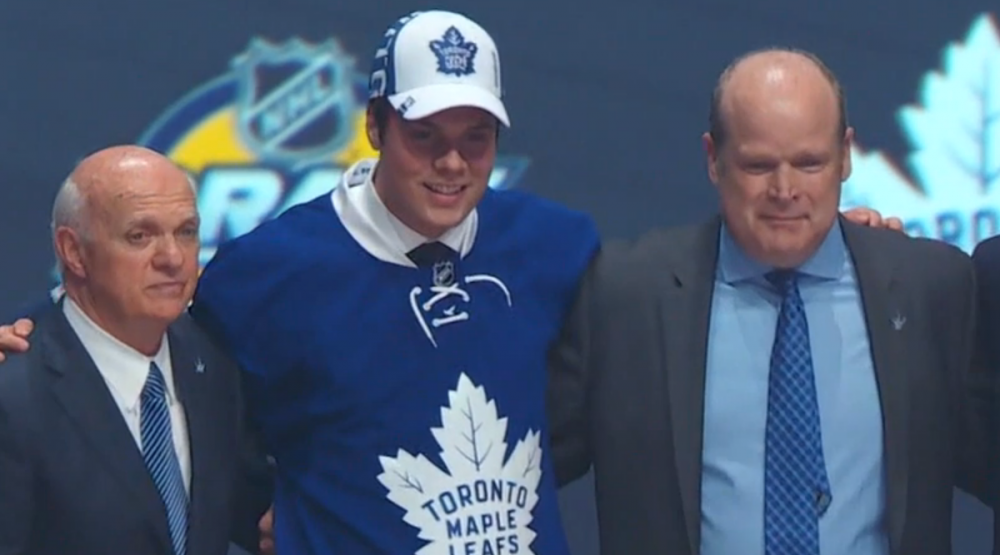 Toronto landed their number one centre for the next decade or longer, selecting Matthews with the first overall draft pick, and the city is buzzing with anticipation. The Leafs haven’t had a centre of Matthews’ caliber since Mats Sundin, and experts say it won’t be long before he makes an impact.

“Matthews is the best prospect available for the 2016 draft,” Dan Marr, director of NHL Central Scouting, told NHL.com. “Matthews is an extraordinary prospect with NHL size, speed, and smarts. He is the ultimate package when you combine all of that with his exceptional work ethic and relentless compete level.”

When Matthews was 15-years-old, he tallied 100 points in 48 minor hockey games with the Arizona Bobcats. One year later, he joined U.S.A Hockey’s National Team Development Program to face tougher competition. Current NHL stars Patrick Kane, James van Riemsdyk, Phil Kessel, and Jack Eichel have also benefitted from the program, though Matthews holds the USNTDP record for most goals in a single season, netting 55.

During his final season with the U-18 team, Matthews collected 116 points in 60 contests before taking his talents oversees. Upon joining Switzerland’s top professional league, Matthews’ dominance continued, notching 24 goals and 46 points in 36 games last season.

Had his birthday been two days earlier, it’s likely Matthews would have been competing with Connor McDavid for the NHL spotlight last year.

And now that he’s finally here, expect nothing less.

It’s been 31 years since Toronto’s had this privilege, taking Wendel Clark first overall in 1985. Shortly thereafter, Clark became a Toronto icon, and Matthews is no different.

Without shutdown centres, teams don’t get very far in today’s NHL. Sidney Crosby (and Evgeni Malkin) took the Penguins to the Cup this season. Steven Stamkos has brought his Lightning club close the past few campaigns, and Jonathan Toews has led his Blackhawks to a number of Stanley Cup wins.

And with Mitch Marner and William Nylander soon to be up front, Morgan Rielly already carrying the back end, and Frederik Andersen in net, Matthews has the surrounding pieces to succeed. It’s safe to say Toronto hasn’t looked this good for a long time.

The Leafs have landed their superstar.