And while the numbers of homes sold were down in the GTA, housing costs still went up 22 per cent over that month, according to The Canadian Real Estate Association (CREA).

The CREA reported Canadian home sales were down by 1.3 per cent month-over-month in January, where it hit the second lowest monthly level since the fall of 2015.

Meanwhile, actual (not seasonally adjusted) sales activity was up 1.9 per cent compared to the same month last year. Sales were up from year-ago levels in about two-thirds of all local housing markets including in the GTA, Calgary, and Montreal, but they were down significantly in the Lower Mainland of British Columbia, including Vancouver which say its average housing cost drop 19 per cent.

“The shortage of homes available for sale has become more severe in some cities, particularly in and around Toronto and in parts of BC,” said Gregory Klump, CREA’s Chief Economist in the report. “Unless sales activity drops dramatically, the outlook for home prices remains strong in places that face a continuing supply shortage.”

The report stated that the number of newly listed homes dropped 6.7 per cent in January, the second consecutive monthly decline. New listings were down in about two-thirds of all local markets, and it was led by the GTA which continues to be a seller’s market territory. 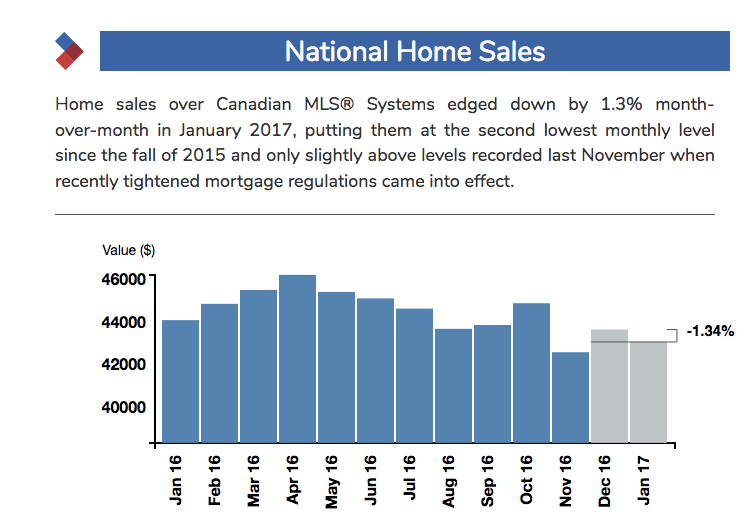 Overall, the actual (not seasonally adjusted) national average price for homes sold last month was $470,253, almost unchanged from where it was last year. The average price is mostly pulled by sales activity in the GTA and the Greater Vancouver area, which remain two of Canada’s tightest, most active and expensive housing markets, according to the CREA.

With that said, the average price for a home in Toronto in January was $770,745, a whole $300,ooo above the national average.

In fact, the average price is reduced by almost $120,000 to $351,998 if Greater Vancouver and GTA sales are excluded from calculations.