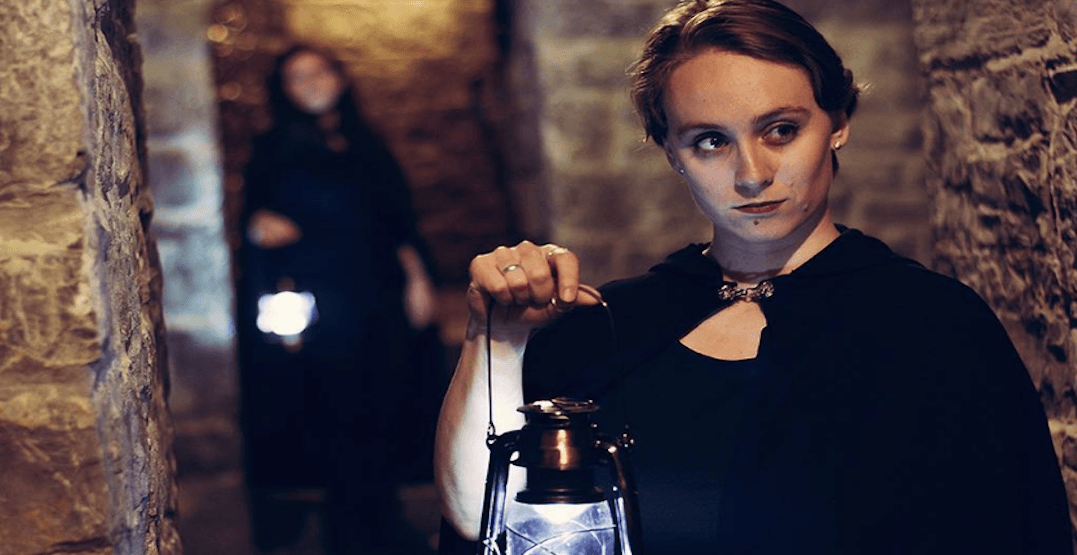 The spookiest month of the year is officially upon us.

And believe it or not, it just so happens that Toronto is one of the eeriest cities in Canada. For centuries, our beloved city has endured decades worth of unsettling activities and you have the chance to hear the stories be retold.

From gruesome murders and executions to tragic accidents, these incidents have resulted in some very mysterious and almost ghost-like occurrences happening throughout the city.

This October, you’re invited to explore Toronto’s mysterious past as you go on a guided ghost walk throughout some of the city’s most (allegedly) haunted spaces.

From a haunted walk through one of Toronto’s historic villages to a bone-chilling guided tour at a haunted lighthouse, here are 12 ghost walks to check out this October.

Ghosts and Spirits of the Distillery

What: With tales of gruesome accidents, the perilous world of whiskey-making and the explosive War of 1812, you’ll quickly see why this is area is known as one of Toronto’s most haunted spots. This Halloween, explore the city’s historic Distillery District by lantern light.

When: Now until October 31, boats will depart every 10 minutes from 175 Queens Quay West
Where: The Toronto Island
Tickets: Available online for $25 per person

Ghosts of the University of Toronto

What: Is Canada’s largest university also its most haunted? The grand architecture and tree-lined paths of the University of Toronto downtown campus are filled with dark history and ghostly tales. During this chilling walk, you’ll hear about secret chambers, restless spirits trapped, haunting love stories and more.

When: Every Friday and Saturday in October
Where: East side of the Royal Ontario Museum, 100 Queen’s Park
Tickets: From $16.75 to $21.75 per person. Children (under 10) are free with accompanying adult

What: You’re invited to explore the supernatural side of Toronto’s historic pioneer village – in the dark! Featuring some of the oldest buildings in the city, Black Creek Pioneer Village is the perfect, creepy backdrop for a night of spine-tingling ghost stories. Each participant will receive a special, limited edition Haunted Walk flashlight.

What: Come and enjoy an outdoor ghost tour that reveals Toronto’s best ghost stories and explores a number of reportedly haunted Toronto sites, without any cheesy gimmicks or ‘bs’ as the website says. This tour is completely free, however, it’s suggested that you tip the tour guide at the end.

What: If you’re feeling brave, come and enjoy a guided haunted walking tour on – and around – the University of Toronto’s St. George campus, an area steeped in tradition and ghost sightings. Learn about the many chilling myths and ghastly deeds that haunt the halls of some of Toronto’s oldest buildings.

What: Come and tour downtown Newmarket and learn about the stories of the past. Guests will be taken on a guided walking tour of Main St. and the Old Town Hall where they will learn about the many suspicious events and anecdotes that have haunted the area since the 1880’s. Throughout the evening, guests will also have the opportunity to learn more about paranormal activity, and by evenings end, experience a real live paranormal investigation and any findings hosted by The Georgina Paranormal Society.

What: Tour the grounds of Fort York at night, and hear stories about this national treasure and the history that surrounds it. From the haunted lighthouse to the bloody Battle of York, the lantern tour should not be missed. You will also visit two military cemeteries near the Fort.

What: Let your imagination take over as you’re led through downtown alleys and laneways to discover some of Toronto’s reputedly haunted buildings. Return to gas-lit Mackenzie House, soothe your goosebumps with mulled cider and biscuits as you hear about the ghost stories associated with the house.

When: October 27 & 28
Where: Mackenzie House, Bond Street
Tickets: Available online for $15 per person

What: Get the entire family (and your four-legged pals) decked out in costumes and head to Riverside for the annual Ghost Walk.

What: Explore Montgomery’s Inn and the Islington Pioneer Cemetery after dark where you will hear chilling stories guaranteed to get you into the Halloween spirit. Inside the candlelit rooms of the restored Inn, you will discover the perfect atmosphere for hair-raising tales. Spooky refreshments included.