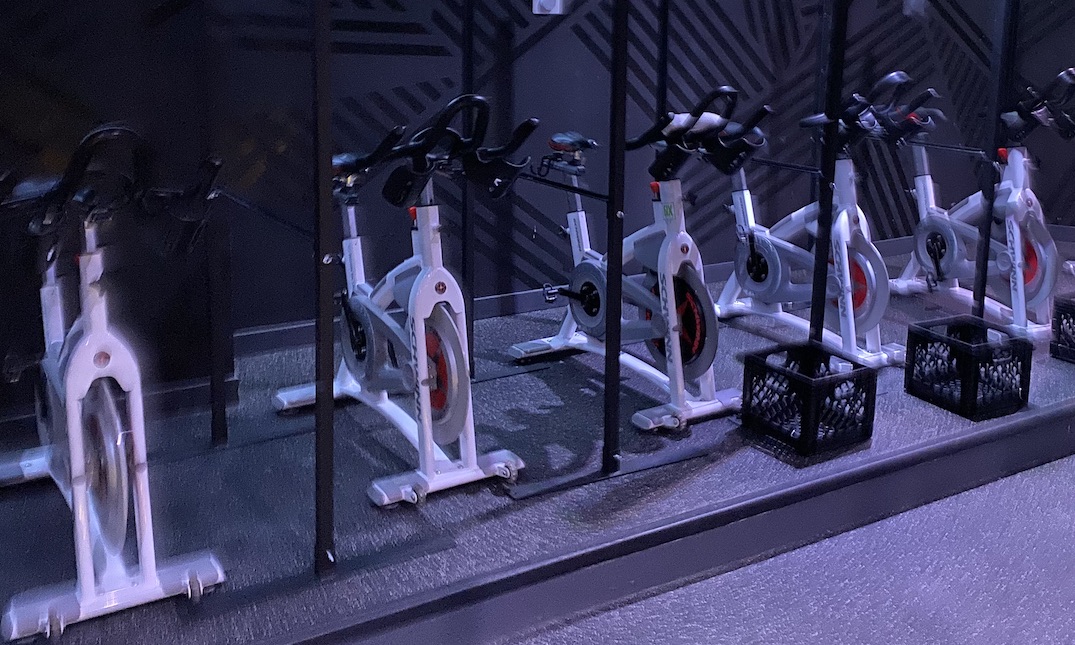 Even with plexi glass, studios will now be empty (Courtesy of 6IX Cycle)

On a warm Saturday morning in Toronto, some residents around the city would generally be making their way to their neighbourhood fitness studios. But, on October 10, like many other mornings earlier this summer, that wasn’t the case.

As owners studios and gyms woke up on this particular Saturday, their next 28 days (or more) will be defining moments for the rest of their livelihoods.

Toronto’s fitness studios are now facing an unknown future, as reduction in class sizes, and now closures, continue to affect their business amid the second wave of COVID-19.

After closing in March, gyms and fitness studios were given the green light to open their doors during Ontario’s Stage 3 of reopening at the end of July.

While August and September allowed them to operate at a reduced capacity, COVID-19 cases in Ontario began to rise, as the province officially entered its second wave. And by October 3, gyms and fitness studios were asked to reduce capacity further – limiting classes to 10 participants, and entire facilities to 50.

A week later, the full closure was announced, and once again gyms were given less than 24-hour notice that they had to shut their doors.

Harrish said that when they were first allowed to run classes again, they spent at least $20,000 to reopen. Besides personal protective equipment and sanitizers, the studio purchased plexiglass dividers to go between each bike, and in front of the instructor’s bike, as well as hospital-grade cleaning equipment.

Similarly, Sweat and Tonic, a fitness studio on Yonge Street, also invested into their space to allow it to adhere with the new reality.

In an open letter addressed to Ontario’s Minister of Health Christine Elliott and Toronto’s Dr. Eileen de Villa earlier in the week, founder David Ingram said that they undertook “significant consultation” from over 20 health professionals for their expertise.

“We have gone beyond the regulatory demands so that our guests could return to our facility with confidence. This has meant an investment of approximately $100k to make many improvements, in particular ventilation capability, Perspex dividers for every individual in every studio, temperature readers, and touchless door sensors, in addition to the minimum 6ft distancing and disinfectant materials,” said Ingram in the letter.

And at five F45 studios co-owned by Phil Cormier, the entire programming of the fitness classes were rebuilt to adhere to public heath measures.

“We completely modified all of our gyms at our expense, we went above and beyond,” Cormier said. “And then you shut us down again.”

All three Toronto studios advocated through the past weeks, pleading with the Ontario government not to shut them down.

In letters to the province and the city this week, both 6IX Cycle and Sweat and Tonic have inquired about data in relation to COVID-19 outbreaks within fitness facilities.

Ingram told Daily Hive that on a provincial level, “data is lacking detail and transparency, with no clear messaging around correlation of higher testing and higher cases.”

“Context is essential and the information provided to the public should be framed with insights,” he said. “We will always follow government guidelines, but we urge the government to exhibit more transparency.”

“COVID-19 can spread in fitness classes because it is difficult to exercise while wearing a mask, physical distancing of 6 feet or more may be required to prevent droplet spread, and good ventilation systems are recommended to increase air exchanges,” said Dr. Dubey.

Dr. Dubey added that these factors combined with the upward trend in cases is what lead to the recommendation that all indoor group classes in gyms and indoor sports team activities to be discontinued.

“We are completely devastated. After the lockdown, we went above and beyond to create safe space for our clients to move and, to date, we have not had a single case of COVID in either studio,” Harrish said after Friday’s announcement.

“This could very well be the end of the group fitness industry as we know it in Toronto. Without proper relief, studios simply cannot sustain another closure.”

Ingram said, even after the closure announcement, they’re still in the dark when it comes to data.

Toronto Public Health also told Daily Hive they did not have any additional information to share when asked about specific data.

“While we asked for data to support these government decisions, we still haven’t heard anything, so we are still in the dark as to how these decisions are being made despite people’s livelihoods being at risk,” he said.

Ingram mentioned the closure of SoulCycle on King Street earlier in the pandemic, which is arguably the biggest spin studio in North America.

“So it’s safe to say that both big and small businesses are in jeopardy right now,” said Ingram.

According to the Canadian Federation of Independent Business (CFIB), more than half (56%) of small businesses say they will not easily survive a second wave of shutdowns.

“The Ontario government’s decision to close restaurants, gyms and fitness centres for a second time this year in Toronto, Peel and Ottawa is a crushing blow to their COVID-19 recovery. These are among the hardest-hit industries, and while once again shut down, their bills will continue to pile up,” read a joint statement by Ryan Mallough, CFIB’s Director of Provincial Affairs, Ontario and Julie Kwiecinski, Director of Provincial Affairs, Ontario.

“These businesses are not closing because they made poor decisions: government is forcing them to shut their doors to help protect society. We implore the government to continue to review available support programs and cover any gaps.”

Cormier worries that the closure will last longer than 28 days, and he said what’s more important than his business and livelihood is the mental health of the members.

“We’ve dedicated our lives to helping your communities,” he said, adding it feels like they’re being punished.

A regular participant at 6IX Cycle, Prisca Laprise went from spinning almost 5 times a week down to just once or twice when the 10 person restriction was implemented. And now, like many others, that will be down to no classes.

“To some 28 days might seem like nothing, but for those of us that exercising is part of our mental fitness and need that support, it’s a challenging time,” Laprise said. “It affects us at work, resulting in more ‘medical leave request’ or even having people leaving their work. It’s not just about the fitness industry.”

Since day one, Dr. de Villa has recommended leaving home for “essential activities such as work, education and fresh air and exercise.”

“Movement is medicine, it is critical for our physical and mental health, and many people struggle to find the motivation to exercise alone at home,” said Natalie Manzarpour, instructor at 6IX Cycle.

“Forcing another round of closures, after what we have all been through over the past six months, is devastating, both for small business owners and for those who rely on those businesses for their own personal well-being.”

For now, all three studios will go back to offering online classes, some even offered for free. But the studio spaces will be empty.

And the empty space may be the reality, even past the 28 days.