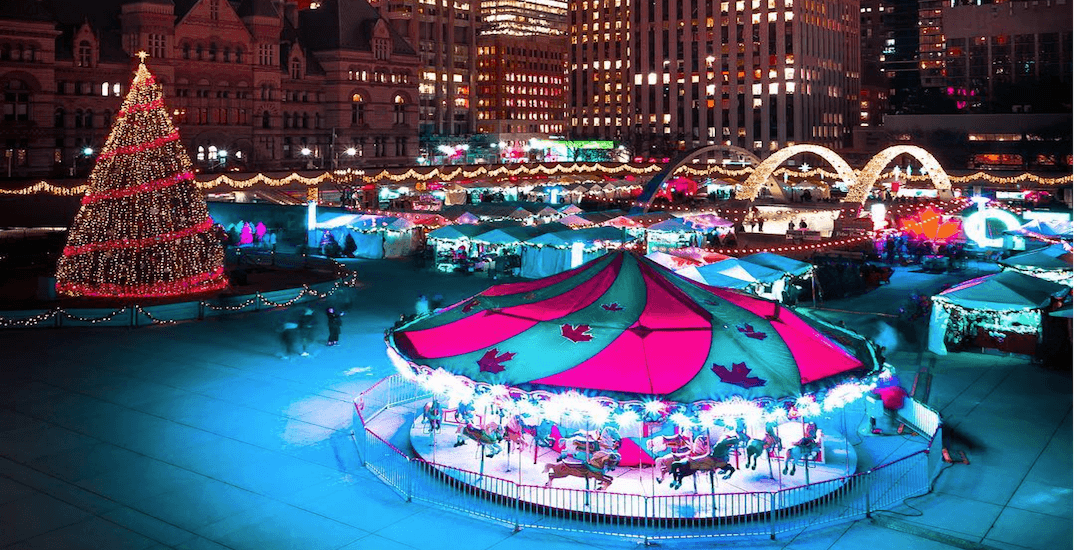 It’s hard to believe that the holidays are officially here.

This weekend, it’s time to celebrate the upcoming new year and the holiday season with our loved ones.

And if you’re looking to head out of the house, here’s what’s going on this weekend in the city from December 22 to 24.

Have a great Christmas (and Festivus) weekend, Toronto!

What: The always crowd-filled and equally as photo-worthy Christmas Market is wrapping up this weekend! Offering boozy holiday cocktails, comforting food stations, no shortage of shopping and a few rides, if you haven’t checked out the market yet this year, now is your final chance!

What: This massive holiday market and winter carnival located outside Toronto City Hall wraps up this weekend. Look forward to holiday shopping, an ice bar, and plenty of festive foods including a two-handed festive feast dubbed Deep Fried Christmas, plus Beavertails, poutine, fudge, and more.

What: This weekend is your final chance to embark on this magical holiday journey as you take a ride on the Polar Express. Operated by the Waterloo Central Railway, passengers will be whisked away to the sounds of the beloved film’s motion soundtrack, enjoy freshly prepared hot cocoa and holiday treats and they will also receive a very special visit from Santa, and each child will be given their first gift of Christmas – a silver sleigh bell.

What: Tour the best noodle houses, learn secrets, recipes, and insights with Osamu Tomita, one of the most revered ramen chefs in Japan during this ramen-centric screening that’ll leave viewers with an insatiable craving and new appreciation for this delicious dish.

What: Take a visit to Nakatomi Plaza this Christmas with a quote-along complete with festive drink specials and a hilarious pre-show hosted by funnyman Thomas Rivas. Tickets are $11.50 or you can purchase a ticket with beer and medium popcorn for$16.81. Yippee ki yay…

What: Sharpen your skates and skills at Toronto’s number one outdoor winter party. Come and celebrate our city in all its winter glory as 1 LOVE T.O. spins funk, hip-hop, R&B and house. With DJ DLUX and host, Mr. 1LOVETO himself, Tyrone ‘T-rex’ Edwards.

What: Kick off the holiday season with an elegant buffet brunch at Windsor Arms Courtyard Café. Enjoy our deluxe omelet station, classic Yorkshire pudding with parma ham and cream cheese, a featured oyster, crab, and shrimp display, and indulge in our wide range of decadent desserts like spiced ricotta chocolate crème brulee, while sipping on bottomless mimosas.