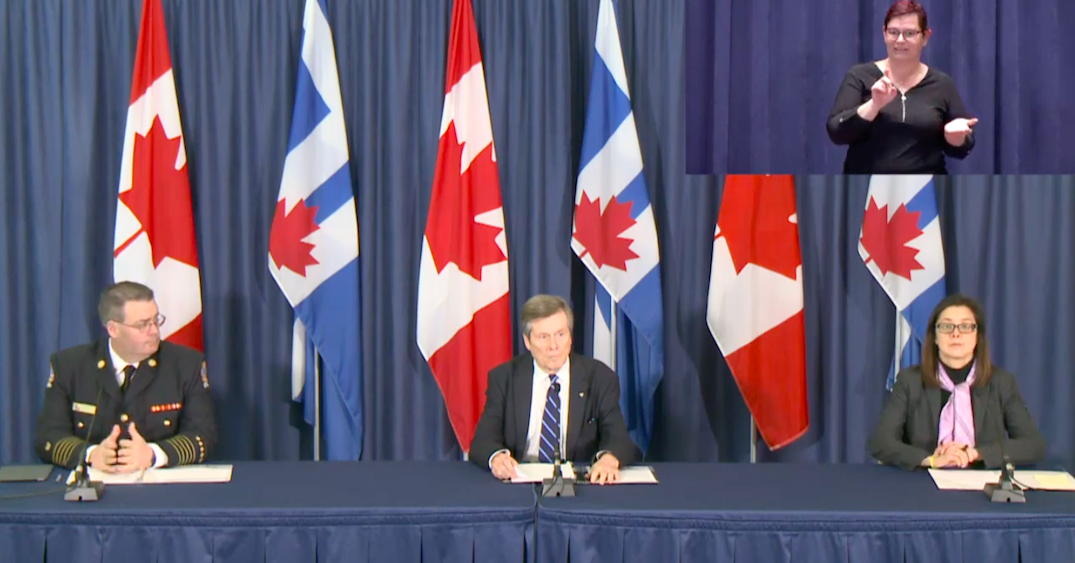 The City of Toronto confirmed 10 new deaths as coronavirus cases reach 1,449 in the city.

On Tuesday, Toronto’s Chief Medical Officer Dr. Eileen de Villa said of the total cases 1,218 are confirmed and 231 are probable, with 142 hospitalized and 83 in ICU.

There is also a new cases in the shelter community at Seaton House, which is receiving the proper protocol to protect staff and residents.

De Villa also announced that the city has partnered with the University of Toronto to alleviate some of the pressure Toronto Public Health is facing as cases continue to increase.

The university will be providing volunteer medical students and two staff from the Faculty of Medicine to begin working this week in low risk case and contacting efforts.

While cases increase, a number of complaints have been received by the city regarding discarding personal protective equipment, along with donations bags.

Mayor John Tory said that residents are dumping garbage and donation bags outside of donation bins in the city, which are currently not being collected.

He’s asked residents to stop leaving donation bags at this time, even though he recognizes they are well meaning.

Tory called on a blitz of the donation bins which further show how “every public servant becomes involved as a byproduct of this crisis.”

The mayor noted that residents have also complained about the disposal of used face masks and gloves on the ground and asked for this action to cease. He called on any residents who see suspicious activity to call 311.

“This carries a potentially big risk for others,” Tory said, referring to possible transmission of COVID-19.

He added that there is a $500 fine for littering.

“The vast majority of people are doing the right thing, but this is a battle to save lives, make no mistake of that.”

“Stay home and stay away from others to avoid the further spreading of the COVID-19 virus,” Tory said.

The City of Toronto declared a state of emergency on March 23.

Enhanced measures for physical distancing and closure of non-essential businesses have been put in place until June 30.

Now, the city can fine $1,000 for two or more residents who are not standing two-metres apart, unless they are from the household.

All public amenities, and city-owned parks and playgrounds are also closed, with all major events cancelled until the end of June.

Based on the city’s data projections, last week, de Villa said that anywhere from 600 to 1,300 Toronto residents could die from the virus over the course of the pandemic, which can be 18 months to two years.