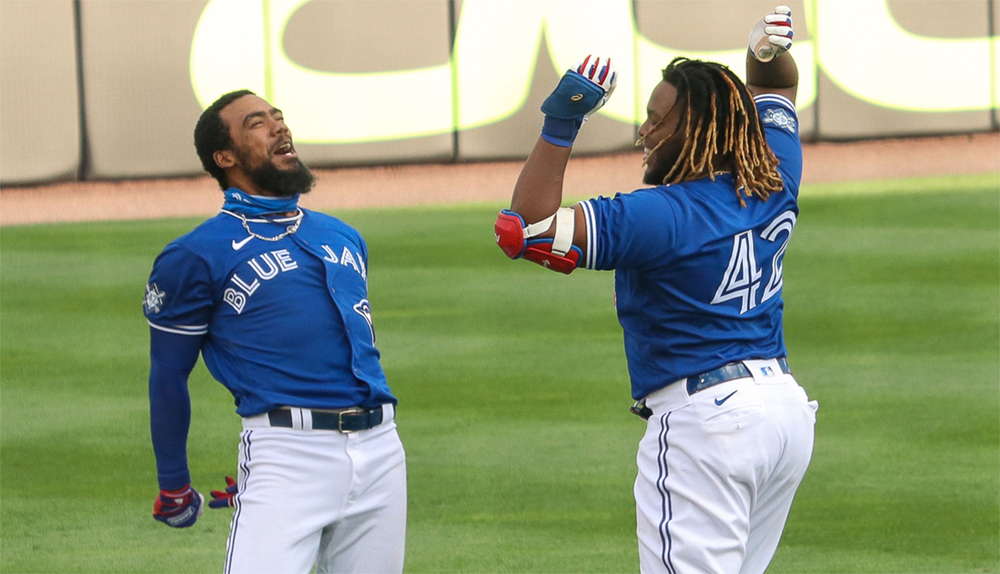 The Toronto Blue Jays are one of the hottest teams in baseball. Winners of 11 of their last 14 and with the most wins in MLB since August 17, the Blue Jays look like a legitimate playoff threat.

And for the first time in four years, they were buyers at the trade deadline instead of sellers. The Blue Jays beefed up their roster with four trade deadline moves, acquiring pitchers Taijuan Walker and Robbie Ray, and infielders Daniel Vogelbach and Jonathan Villar.

OFFICIAL: We’ve acquired INF @JRvillar6 from the Marlins for a player to be named later.

Welcome to the #BlueJays, Jonathan! pic.twitter.com/p1R3yVcZWg

Toronto wasn’t the most active team at the deadline (that title belongs to the San Diego Padres), but the Blue Jays were far more active than they’ve ever been in recent years. Instead of looking ahead to next year, the Blue Jays are living for October.

This is uncharted territory for the entire nucleus of Blue Jays players. Teoscar Hernandez is the longest-tenured member on the roster, and he came aboard from a trade with the Houston Astros at the 2018 trade deadline.

This team is accustomed to selling, not buying.

As of this moment, the Blue Jays occupy the last playoff spot in the American League. According to FanGraphs, Toronto’s playoff odds sit at 79.5% with a little more than half of the 2020 season left to play. They’re also two games up on their closest competition.

The Vogelbach deal with the Mariners didn’t move the needle all that much for the Blue Jays, but he’s a home run threat off the bench and a left-handed bat for manager Charlie Montoyo to use at his will.

At the very least, Vogelbach can draw a walk and get on base, although his power numbers took a nosedive with the Mariners before arriving with the Blue Jays. Used in a limited capacity off the bench, the 2019 All-Star provides some left-handed pop in a backup role.

Walker could become the most valuable trade deadline acquisition for the Blue Jays this year. It’s an extremely small sample size, but in one start already, Walker threw six innings of shutout ball against the Orioles last Saturday. The right-hander is the shot of adrenaline the Blue Jays desperately needed in their starting rotation.

Welcome to the #BlueJays, Robbie! pic.twitter.com/5RGfVuZ7Kq

Ray comes over from the Arizona Diamondbacks, and he’s an ideal “change of scenery” candidate. The former All-Star in 2017 has an inflated ERA of 7.84 in seven starts and has walked 31 batters in 31 innings of work.

However, Ray has been one of the top strikeout pitchers in baseball dating back to 2017, and led the National League with a 12.1 SO/9 rate with the Diamondbacks. The Blue Jays are hoping to harness that strikeout power and also cut down that atrocious 20.1% walk rate.

Lastly, the Blue Jays landed Villar in a trade with the Miami Marlins for prospect Griffin Conine. With Bo Bichette on the injured list, the Blue Jays desperately needed some infield help, and Villar not only provides versatility, but he can also steal bases and hit home runs.

And he also led the National League with nine stolen bases and swiped 40 bags as a member of the Baltimore Orioles last season. He’s another weapon in Montoyo’s tool belt, in a lineup devoid of much speed.

As a number eight seed in the American League, it made little sense for the Blue Jays to go gangbusters and trade their most coveted prospects to secure a playoff spot this year. Toronto could play their way into a playoff spot all on their own without adding players, but their trade deadline reinforcements increased their postseason chances.

These trades indicated Toronto’s desire to win in 2020; four rentals players brought in, and a relatively low cost to acquire them from the Mariners, Diamondbacks and the Marlins.

Ultimately, the Blue Jays didn’t land a frontline starter or All-Star infielder at the trade deadline, but they addressed two key areas on their roster: starting pitching and infield offence. And with Bo Bichette and potentially Ken Giles and Nate Pearson returning to the fold in September, this Blue Jays roster looks intimidating down the stretch.