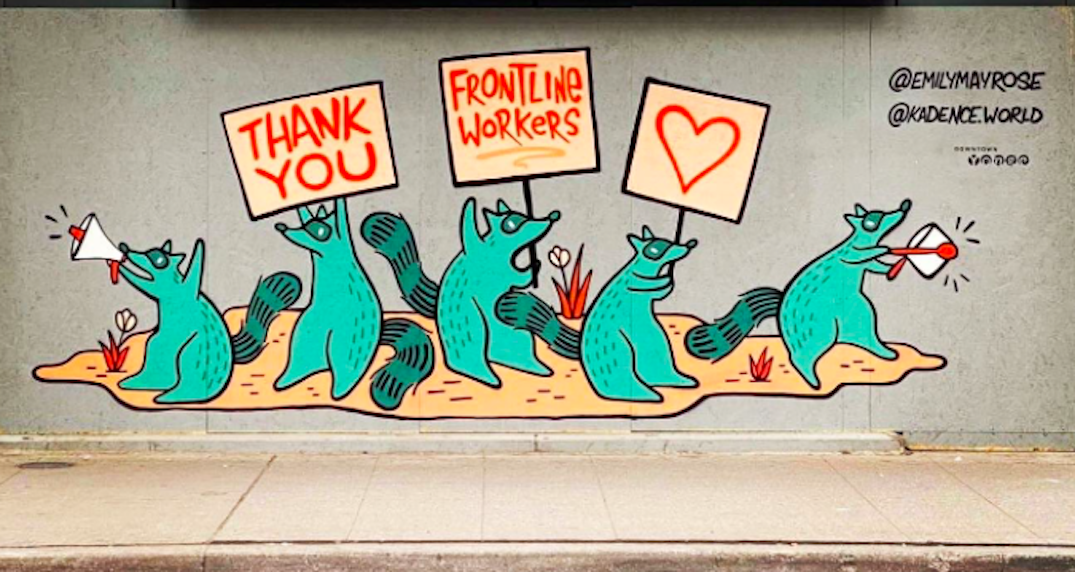 “This project, delivered by local graffiti artists, celebrates many of our city’s heroes who continue to fight COVID-19 and save lives while putting themselves at risk. Our health care workers, doctors, nurses, paramedics, firefighters, grocery store and pharmacy workers, mail workers, community workers, volunteers, and more have worked tirelessly,” Tory said.

“They deserve to be recognized in this way and I am so grateful to all of them for doing their part to keep Toronto safe.”

Earlier in the spring, StreetARToronto (StART) sent out an open call to local Toronto artists to apply.

A key part of the application included identifying, as the inspiration for their artwork, frontline service providers from the local community including healthcare workers, first responders, volunteers, grocery and pharmacy workers, delivery services, and neighbours who are actively working to keep the community safe during the pandemic.

In total, the project will be completed by 23 Toronto street, mural and graffiti artists featuring a series of 15 street art wall murals of diverse essential workers of all ages, genders, backgrounds, and professions.

The rest are scheduled to be finished by the end of July.

Created in 2012 by the City of Toronto, Transportation Services Division, StART is a program designed specifically for streets and public spaces.

In May, the Downtown Yonge Businesses Improvement Area (BIA) partnered with Kadence World to create “positive community artwork” on boarded-up retail stores in the downtown strip, to thank frontline workers.