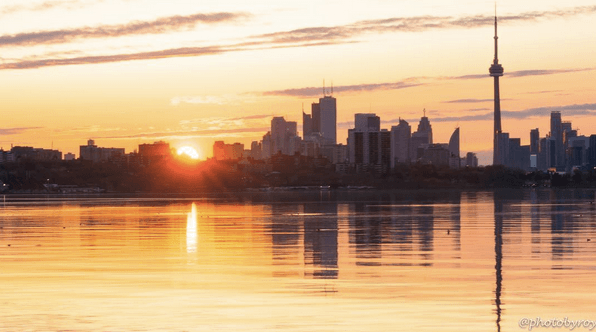 Get ready for a fall weekend (@photobyroy/Instagram)

Nothing like a short, warm, fall week to get us excited about the weekend!

From music to markets, check out what’s happening in the 6ix over the next few days. And have a great weekend, Toronto!

Finally! The Frank + Oak Women Pop Up Series is in town. The pop up will be in the city for three days only—come shop the collection in person!

OktoberFEAST is a collective effort between the Canadian Cancer Society and Ontario craft brewers, wineries and gourmet food vendors to raise critical funds for the fight against cancer. Showcasing live music and local vendors, ranging from food trucks to Toronto’s hottest restaurants, craft beers to spirits, OktoberFEAST is sure to fill your belly and warm your soul.

Catch some preseason NBA action this Friday with our Toronto Raptors! Get the excitement started early with lots of ‘Go Raps Go’ chants.

Check out this FREE PARTY to celebrate the launch of the Fall 2016 Season at The Power Plant! Be the first to experience three new exhibitions by artists Yto Barrada, Maria Loboda and Latifa Echakhch. Music by Teo Nio and CRSB; cash bar available all evening.

Sydney’s Boy & Bear are in town this weekend. The band has topped the charts in their native country with all three of their studio albums and have collected 5 ARIA awards (the Australian equivalent of the Grammy) since 2011. They are on the road with their 2015 release Limit of Love.

Where: Phoenix Concert Theatre, 410 Sherbourne Street
When: October 14 at 8 pm

Toronto’s Boobyball is one of the fall’s most highly anticipated fundraising events. This year’s Paradise City theme welcomes attendees to the jungle, where Toronto’s most exotic scenesters are set to shake their tropical tails and fan their fancy feathers to support Rethink Breast Cancer.

Where: Buonanotte Supperclub, 19 Mercer Street
When: October 14 at 10 pm

Families of all ages, take your brick building to the next level! Discover life-size LEGO® models, dive into a huge Brick Pit, learn from a Master Model Builder and so much more! EVERYTHING IS AWESOME.

Toronto’s premier event for fans of all things horror! Experience mystifying supernatural performances, pose with an awesome array of life sized props, gaze at the array of astonishing outfits and costumes, and win prizes!

The Community Market at The Well presents the Indigenous Artisan Market, featuring First Nations cuisine, crafts, jewelry, and apparel. Warm up with some homemade venison stew, baked bannock, and sweetgrass tea, and shop for your Christmas presents early.

Fall is finally here and who doesn’t like sweaters, warm drinks and browsing local artisans and vendors to find those perfect things to help you get nesting for the winter months! Shop from 40+ of Toronto’s finest vintage, handmade, fashion, art, beauty and food vendors.

Eager for NFL Sunday? You can cheer on CFL this Saturday as the Toronto Argos host the Saskatchewan Roughriders at BMO Field.

Toronto Bakers Market is a free event that hosts bakers and vendors with delicious treats! So definitely bring that appetite.

Discover what it’s like to live in—not just visit—two of the world’s great wildlife parks with a photographer who has immersed himself in two equally wild, but very different places. Charlie Hamilton James has been shooting in Peru’s Manu National Park since the 90s, and his misadventures as an Amazonian landowner were documented in his popular BBC Television series, I Bought a Rainforest.

Cape Town’s biggest music export is arguably duo Die Antwoord. Rappers Ninja and Yolandi Visser are unforgettable live performers, and their music incorporates elements of the “zef” culture. The duo released Mount Ninji and da Nice Time Kid in September, and are on tour promoting the record with a string of sold-out shows!