It’s the calm before the storm in Toronto this morning. Literally.

While Monday morning’s commute is not affected by the weather, it looks like this afternoon/evening’s drive will be a different story.

Toronto is under a Winter Weather Travel Advisory, issued by Environment Canada and in effect for today into tonight.

The agency said the city is expecting light snow to begin this morning and is expected to become heavy at times this afternoon and continue through the evening.

The advisory stated that snowfall accumulations of 10 to 15 cm are possible by the time the snow ends late tonight.

And The Weather Network said this is a “potentially historic snowfall event” for the region.

“Snowfall totals across most of the GTA will hit the 10 to 15+ cm range, but areas towards Hamilton may see 15-20+ cm and the Niagara region will receive 20-25+ cm as a result of lake-effect enhancement,” said The Weather Network. “Travel will be particularly difficult near these areas.” 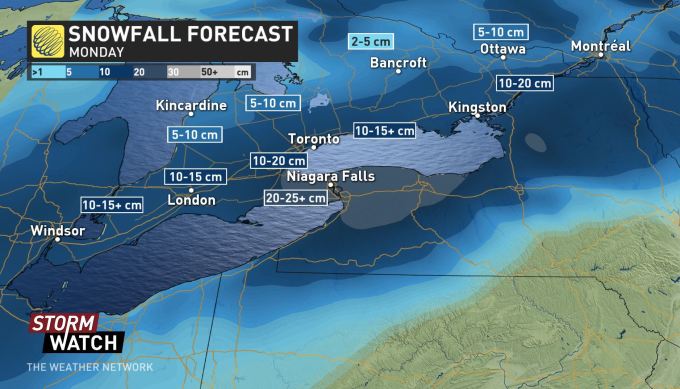 Turns out, this amount of snow is actually a lot for Toronto in November.

“While Monday’s snowfall will just crack the the top 10 of the highest amounts of the white stuff ever recorded at Pearson International Airport in all of November — with a good chance of making the top 5 — there’s the potential for it to receive the highest amount this early in the season (on or prior to Nov. 11),” said The Weather Network.

Toronto would just need over 15 cm of snow to be the fifth top snowfall in November history. 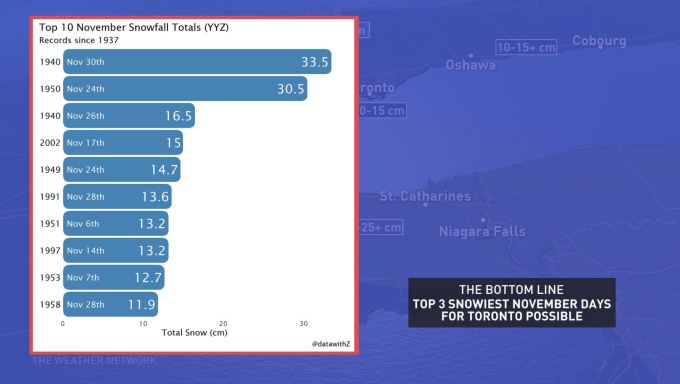 It’s currently -1°C in Toronto, and as the snowfall begins, the temperature will feel more like -7°C.

Stay safe out there.