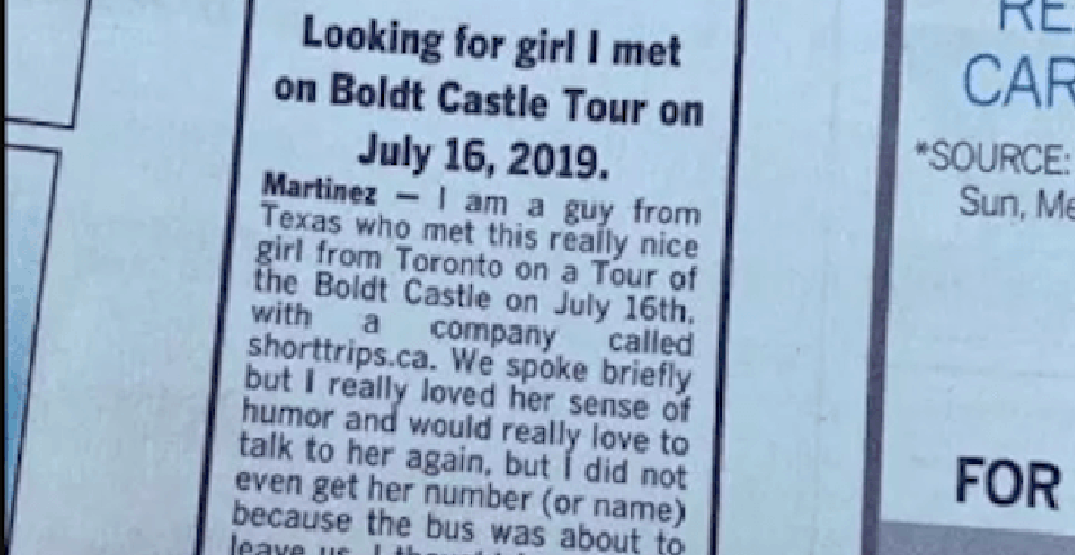 The newspaper ad from Artruro Martinez

A personals ad in a Toronto newspaper by “a guy from Texas” has now gone viral, after an image of the ad was shared online.

In the ad, Arturo Martinez writes that he was on tour of the Boldt Castle with a tour company called shortrips.ca on July 16, when he “met this really nice girl from Toronto.”

The ad states that the two “spoke briefly,” but that he “really loved her sense of humour and would really love to talk to her again.”

Unfortunately, however, he “did not get her number (or name), because the bus was about to leave us.”

Martinez assumed he would see her again on Centre Island, “since we were both going there,” but it was not meant to be.

“We were probably there at different times,” he speculates.

Now, as the ad continues to gain traction, Martinez told Daily Hive that the response to his ad is “something I could never have imagined.”

Since the ad was shared, Martinez said he has received “so much support from everyone,” and is thrilled that “99.9% of comments online have been positive with so many people willing to help.”

Reflecting on the incident itself, Martinez quipped that “maybe there was something magical about the castle,” that the pair discovered together.

“I don’t know but it was a situation where at the end of the day I was thinking, ‘I don’t think I’ve ever met anyone like this before.'”

While he “quite surprised” by all the attention the ad has received, “all of this support and encouragement has really touched my heart.”

And while he never expected the ad to receive the attention it did, Martinez is still glad he posted it, “thinking that maybe there was a one in a million chance” that she would read it.

In the meantime, Martinez reiterated how “very, very grateful” he is for each person who has been trying to help him.

“I honestly thought that very few people read that part of the newspaper.”