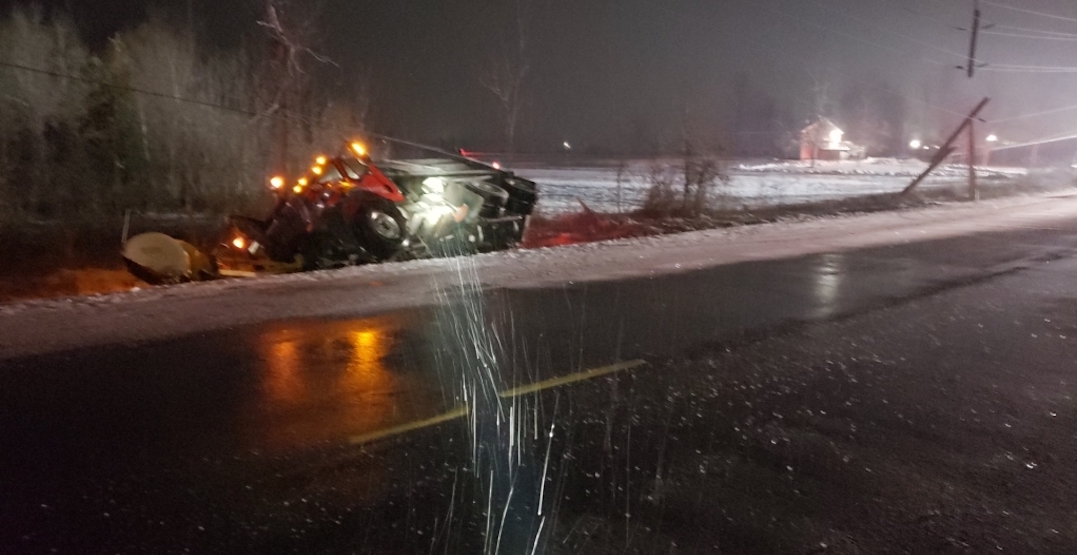 A 28-year-old man has been charged with alleged impaired driving after the snowplow he was operating ended up in a ditch on the side of the road over the weekend.

York Regional Police reportedly responded to a call at Baseline Road, west of Civic Centre Road, in the town of Georgina for a single-vehicle collision at 7 pm on February 1.

On arrival, officers found that a snowplow had left the roadway and rolled on its side. The truck struck a hydro pole during the accident as well.

Officials could smell alcohol as they spoke with the driver, they said, and he was placed under arrest. He was transported to headquarters for a breath test, which he reportedly failed.

The man, 28 and from the Township of Scugog, has been charged with 80 Plus, Impaired Driving, and Dangerous Operation.

IMPAIRED – The 28-yr-old driver of this snow plow was arrested and charged with impaired driving after rolling his truck off the road and striking a hydro pole. This occurred on Saturday evening on Baseline Rd, west of Civic Centre Rd, Georgina. https://t.co/pqZ0Cr80F7 pic.twitter.com/KVvqnysJTQ

York Regional Police say that in 2019, they received 3,500 calls to 9-1-1 to report suspected impaired drivers, and they are reminding anyone who sees dangerous driving or behaviours on the road that could jeopardize anyone’s safety to call police.