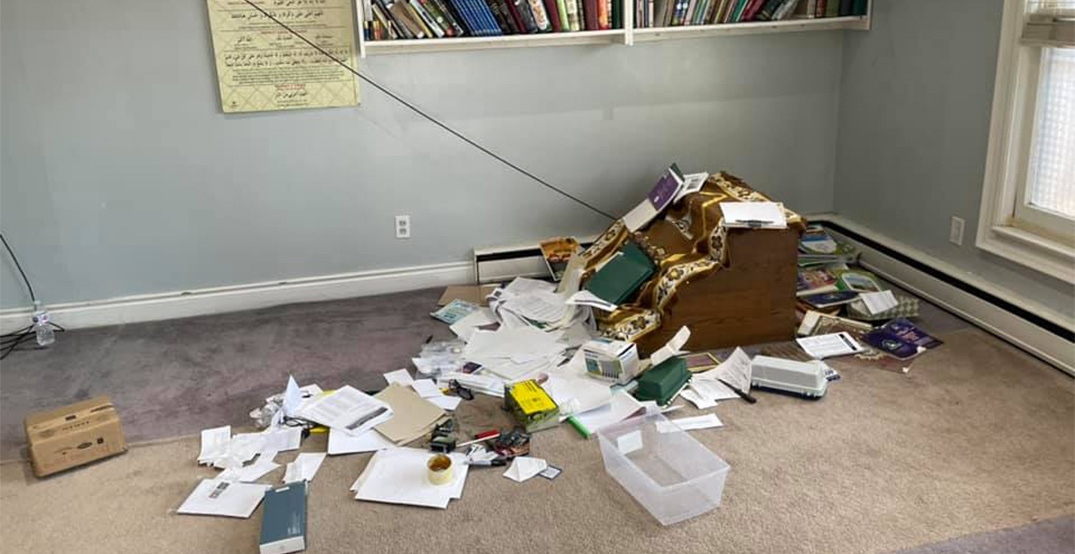 Several Canadian political leaders voiced their disapproval Monday about vandalism against a mosque in Scarborough.

The Baitul Jannah Islamic Centre shared photos on Sunday of the destruction caused after an overnight break-in. The suspects ripped through the mosque tossing books, papers, and other belongings on the floor, according to the mosque’s Facebook page.

They also stole the donation box, disabled the mosque’s CCTV cameras, and stole the surveillance equipment, Toronto police said in a statement.

Although the crime is not yet officially considered hate-motivated, police say the Hate Crime Unit has been notified.

The mosque was previously broken into in March, April, and June of 2019. Police say a person was arrested and charged in relation to those attacks, and it’s not yet known if the most recent break-in is linked to the previous ones.

Rizuan Rahman shared that this was probably the 10th time in recent years that the mosque has been vandalized or broken into.

“This is a place where peaceful, loving, hardworking people of our community come to pray and find solace,” Rahman wrote on Facebook. “For a place like this to be vandalized, in the heart of Scarborough, which is one of the most diverse areas of the country, is heartbreaking.”

Prime Minister Justin Trudeau tweeted Sunday evening that he was “deeply disturbed” by the vandalism at Baitul Jannah.

“Islamophobia has no place in Canada, and we will continue to take action to make our communities feel safe,” he said.

I am deeply disturbed by the vandalism targeting the Baitul Jannah Islamic Center in Toronto. Islamophobia has no place in Canada and we will continue to take action to make our communities feel safe.

Mayor John Tory also voiced his support for the mosque, adding he hopes the suspects are found and brought to justice.

Very angry about the latest vandalism at the Baitul Jannah Islamic Centre on Kingston Road in Scarborough. This kind of Islamophobic behaviour has no place in Toronto. Please help police bring those responsible to justice.