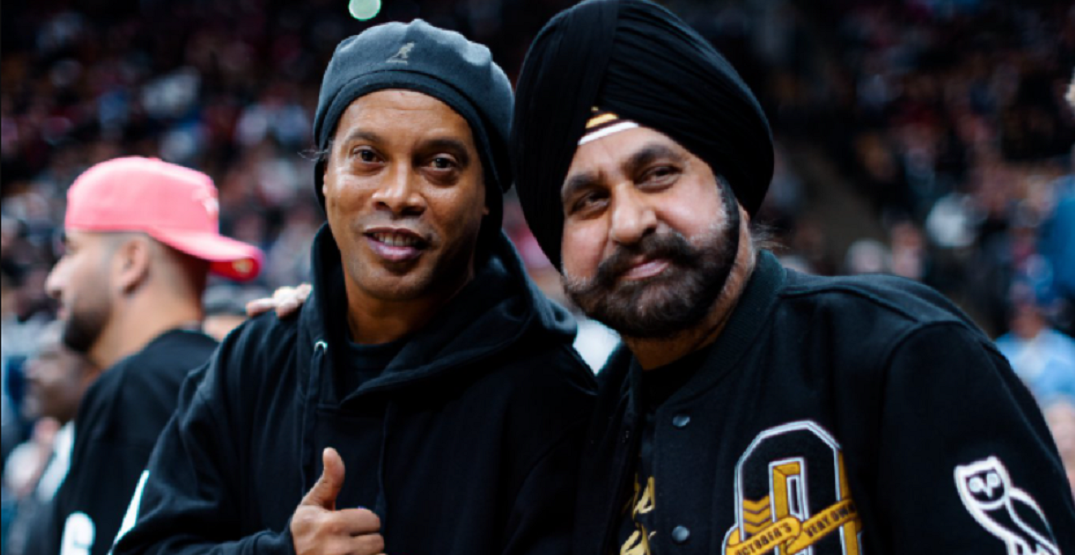 You can add Ronaldinho to the long list of celebrities spotted at a Toronto Raptors game.

Spotted at Sunday’s matchup against the Miami Heat (which also doubled as a return of Kyle Lowry to Scotiabank Arena for the first time since February 2020), the Brazilian soccer legend was sitting courtside along with Raptors Superfan Nav Bhatia.

Ronaldinho got a big ovation from Raptors fans when a tribute video of his was shown on the stadium scoreboard.

Ronaldinho in the house at the #Raptors game: pic.twitter.com/Gx9dhVOROm

After a career that spanned across Barcelona, Paris St-Germain, AC Milan, and several Brazilian clubs as well as his home country’s men’s national team, Ronaldinho officially retired in 2018 with three major league titles, a UEFA Champions League trophy, and a 2002 World Cup on his resume.

“A very special night here in Toronto,” the 42-year-old shared on Twitter, along with pics with Lowry and the Heat’s Jimmy Butler. “Thank you very much for the reception and affection of all, it is a pleasure to be here!!! Let’s go Raptors!”

A very special night here in Toronto.. Thank you very much for the reception and affection of all, it is a pleasure to be here!!!#LetsGoRaptors 🏀🤙🏾 pic.twitter.com/PB4qh7JCAu

Thanks for stopping by, @10Ronaldinho 🤙 pic.twitter.com/vBRbq1Y7zF

The man they call ‘dinho might not have been Toronto’s good luck charm on Sunday though, as the Raptors ended up falling 114-109 to Miami on the night.