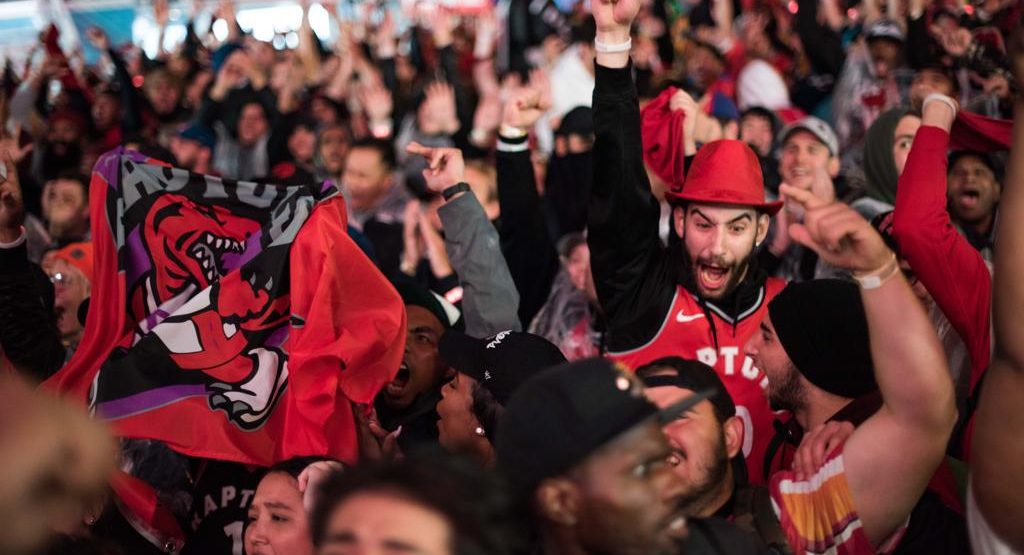 The Raptors have another chance to secure the championship on Thursday night as they tip off Game 6 of the NBA Finals series against the Golden State Warriors at 9 pm.

While the Raps are on the road in Oakland, it doesn’t mean the city won’t be buzzing with fans.

Just like Game 5 on Monday, the City of Toronto is expecting large crowds downtown tomorrow night, and is again working with Maple Leaf Sports and Entertainment, the Toronto police, as well as the TTC and GO Transit to make sure things are under control and everyone can cheer on the team while getting around smoothly and safely.

Both the TTC and GO Transit have plans to make due with the large crowds expected, and there are a number of road closures in effect that you should consider if driving through the area.

The city is reminding the public to try and use transit, cycle, cab for ease of getting around during the busy evening.

The TTC will have additional service running on Thursday evening, summoning up five additional subway trains as well as 25 buses that will be ready before and after the game.

Keep in mind that the last trains coming out of downtown will leave Union Station at 2:25 am. That also means the last connections to Line 2 at Bloor-Yonge and St. George Stations and to Line 4 at Sheppard-Yonge station will be available then. Surface connections at all stations will run as regularly scheduled.

GO Transit is going to recruit some extra trains to be on standby along the Lakeshore line after the game.

Due to the road closures in the area (see below), Union Station Bus Terminal will be closed at about 9 pm on Thursday night.

Transit-riders that to head north after that time can use their valid GO ticket to ride the subway at no extra charge from Union Station to Highway 407 Station, where there will be GO buses waiting.

You can find a complete schedule and route information on GO Transit’s website.

The city has outlined a few road closures that will take place in the area, some starting as early as 7 am on Thursday.

We already know the drill—Jurassic Park gets pretty intense. As a result, Maple Leaf Square will see closures in and around the area all day.

Bremner Boulevard between Lake Shore Boulevard West and York Street will be closed from 7 am on Thursday, June 13 until 2 am on Friday, June 14.

York Street between Lake Shore Boulevard West and Front Street West, as well as Bremner Boulevard between Lower Simcoe Street and York Street will have closures beginning as early as 9 am on Thursday, June 13 until 2 am on Friday, June 14.

York, Bay, and Yonge exit ramps, both eastbound and westbound, on the Gardiner Expressway will be closed in the evening, starting at 10 pm on Thursday, June 13 until 2 am on Friday, June 14. You may use the Spadina and Jarvis exit ramps instead if you’re planning on travelling into the downtown core during this time.

Here is a map of these road closures: