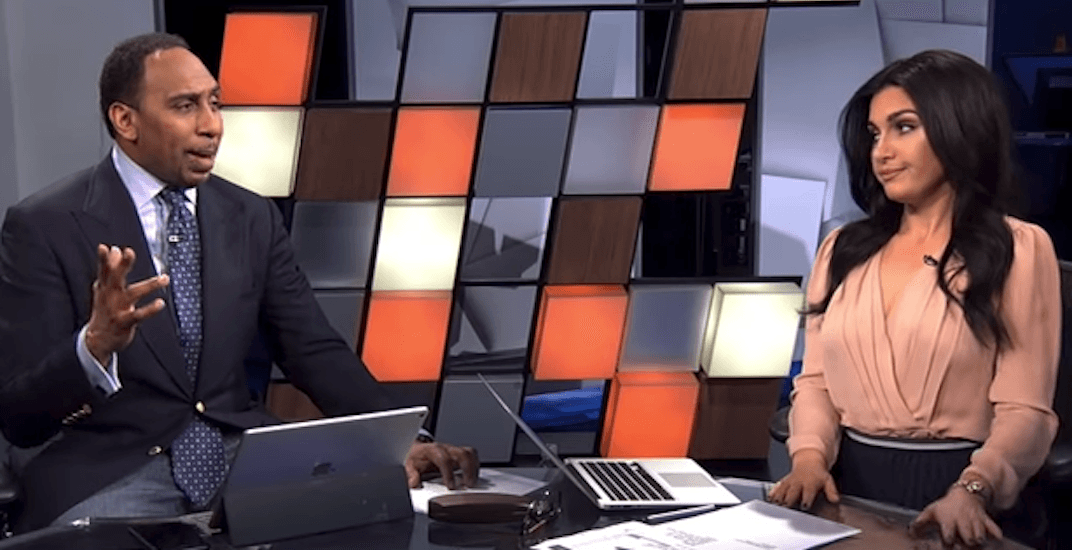 The Toronto Raptors have won nine games in a row, are first in the Eastern Conference, and recently defeated the top team in the NBA, but they’re still not getting the respect they deserve south of the border.

For an example of this, look no further than ESPN’s Stephen A. Smith.

Despite 50 wins, giving them a four-game lead over the Boston Celtics and an 11.5-game lead over the Cleveland Cavaliers – the outspoken analyst said the Raptors don’t deserve to be the favourites to win the Eastern Conference this year.

“When you look at the Eastern Conference, I’m sorry, there is no one who definitively deserves to be a favourite over LeBron (James),” said Smith. “[The Raptors] don’t deserve it, I’m not giving it to them.”

While LeBron is one of the greatest players of all-time and has appeared in seven consecutive NBA Finals, his team hasn’t looked like a contender this year.

In their lone meeting this season, the Raptors beat the Cavs 133-99.

Raptors fans weren’t pleased with the commentator’s opinion, to say the least.

@stephenasmith Way to disrespect @Raptors . You really are one of the worst people on TV. You might be a great human being I have NO idea, but you’re worthless as a “reporter” or “commentator”. You have nothing but a loud yelling shtick.

@stephenasmith Your a Straight Up Goof! You’ve allways been one and allways will be one. Dissin the raptors like you watch them GTFO! GET OFF LEBRONS D*ck!.

If the Raptors need any more motivation to prove the league wrong, they should watch @stephenasmith on First Take today.

@stephenasmith why don’t you give the @Raptors the credit they deserve? You’re always so dismissive! Show the love! #WeTheNorth

While the accolades have been slow to come for Toronto, not everyone is in the dark.

Hall of Famer Charles Barkley argued that the team has fixed some of the problems that plagued them in the past, adding that he thinks they will win the Eastern Conference.

“They really improved their bench,” Barkley said. “DeMar DeRozan is the most underrated great player in the NBA. Nobody ever mentions this kid when we talk about great players in the NBA. He has taken his game to another level. They have arguably one of the best benches in the NBA.”

Responding to skepticism about the Raptors’ ability to continue to perform at a high level, DeRozan had this to say:

“We take that disrespect and carry it into games.” – @DeMar_DeRozan https://t.co/kjd73VPfB1