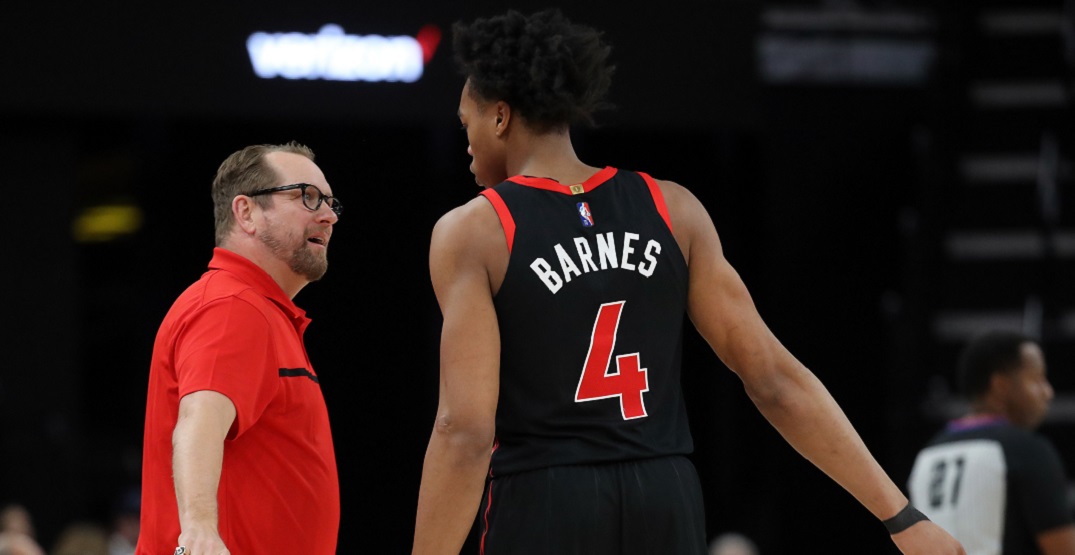 When the Toronto Raptors emerged from their locker room last night to start the second half, Scottie Barnes took a seat next to head coach Nick Nurse on the team’s bench.

A member of the starting unit since day one of the season, Barnes didn’t take the court until 6:58 into the third quarter in Wednesday’s game against Minnesota.

Raptors fans wondered if it was an injury or some mind games from Nurse to motivate the 20-year-old star, as Barnes had just four points entering halftime.

But Nurse explained it wasn’t a punishment or to send a message — he simply liked the match-up Precious Achiuwa had on Timberwolves star Karl-Anthony Towns.

“I just thought [Achiuwa] was really into the defensive end,” Nurse said. “I thought [Achiuwa] attacked him pretty good and was giving a great effort on Towns. Precious did a great job defensively on him with effort, and I just wanted to give him that look.”

Towns, averaging 24.4 points this season, was limited to nine points in the first half, increasing to 16 by the game’s end. Up 62-60 at the half, Toronto emerged with a 10-point lead by the time Barnes came back in and ended up winning 125-102.

Nurse adds that Barnes was fine to allow the different lineup to play to begin the second half.

“He was a part of that decision, too,” Nurse explained. “He just thought that Precious should match-up on him, and he’s like, ‘I’ll come off the bench,’ let Precious go guard him.”

Barnes finished the game with 24:53 of court time, his third-lowest total of the season. But despite the slow start offensively, he finished with 17 points, five rebounds, and four assists.

“I was glad to see him kind of get in the game and find his way into it,” Nurse added. “We see that every now and then he just can’t quite [get going], the ball doesn’t find him, and he can’t quite find those maneuvers in towards the rim, and he finally did there for a stretch and imposed his size on everybody.”

The win put the Raptors two games up on the Cleveland Cavaliers, as they remain in sixth place in the Eastern Conference. Toronto is back in action tomorrow night, where they travel to take on the Orlando Magic at 7:30 pm ET.