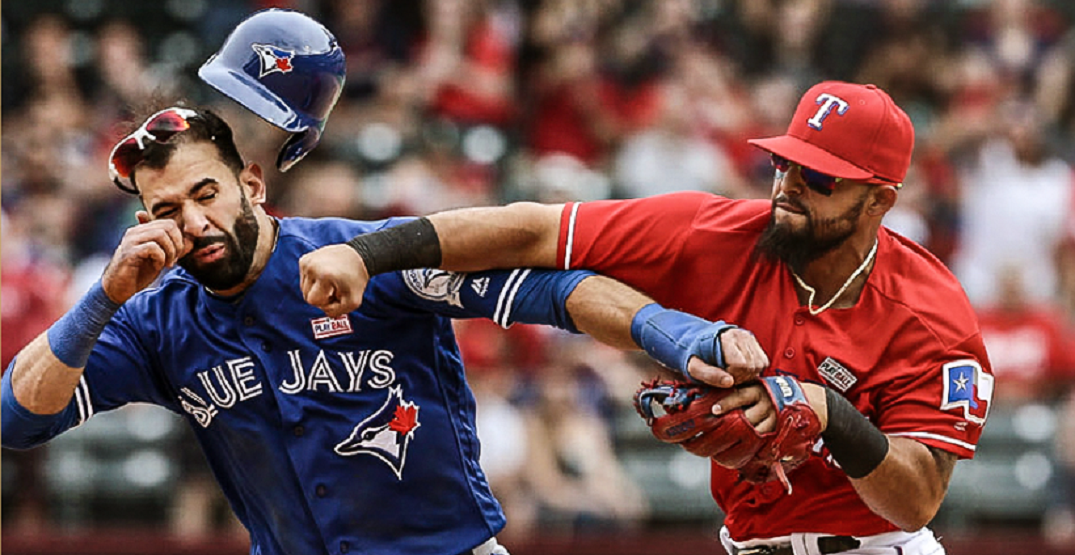 The Texas Rangers don’t have a ton of success to celebrate in their history. Celebrating their 50th anniversary this season, they’ve never won a World Series title, losing consecutively in 2010 and 2011.

But they did have a player punch Jose Bautista once in a regular season game, so there’s that.

Six years ago today, the Toronto Blue Jays and Texas Rangers converged on the diamond for a mid-game brawl. Most of the time when the benches clear in baseball, nothing happens other than a few good shoves and some words being exchanged, but that wasn’t the case for Texas’ Rougned Odor and Bautista.

Odor, seemingly upset with a slide from Bautista, clocked the Toronto sporting legend right across the jaw, knocking off his helmet and sunglasses.

It’s a great photo, there’s no doubt about that.

Of course, the punch itself was devoid of any context.

The Rangers and Odor were also a little peeved about how things had gone down the previous playoffs, where Bautista’s monster bat flip following a go-ahead three-run home run in winner-take-all Game 5 of the ALDS the previous fall.

The Jays had toppled the Rangers in that game to advance in the playoffs and would sweep them in a three game set the following fall in the ALDS once again.

As one now-infamous Blue Jays’ fan sign read, “Would rather get punched in May than knocked out in October.”

Blue Jays fans let them know the absurdity of the tweet:

The pinnacle of the 50-year-old franchise. Congratulations on the anniversary, @Rangers! May you have no other moments bigger than this. https://t.co/2g5ky5AfoD

I guess they've got nothing else to celebrate 🤷‍♂️ https://t.co/99tETaYEUE

Congrats to the Rangers, losers of more games than all but four teams since being swept in in the 2016 ALDS, currently six years into their five year rebuild and still in (checks notes) last place. https://t.co/nWMalhhzgF

This truly is the definition of a clown post https://t.co/0z6SuZjBUV

then proceeded to get swept in the same season https://t.co/HfJSYBcSel pic.twitter.com/Ac8z8DEIDS

This has to be the most embarrassing tweet from a professional sports franchise https://t.co/XdaDXTCBnM

The Rangers are currently last in the AL West with a record of 13-19 and have not won a playoff game since Game 2 of the 2015 ALDS against Toronto. But at least they’ve got the memories of a brawl from six years ago to hang onto…