According to The Weather Network, an incoming “soggy system” that’s headed towards Southern Ontario is poised to end April on a wet note.

While the old adage of April showers hasn’t been very prevalent this year, the coming week looks to change that, as starting late Tuesday and going into early Wednesday, up to 55 mm of rain is possible.

The weather authority said that Tuesday’s temperatures will be on the cooler side, but daytime highs will still hit double digits, reaching 10°C in Toronto.

By Tuesday evening, soggy conditions are projected to begin and linger until Friday. 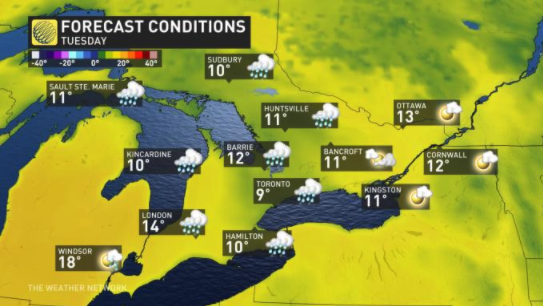 The Weather Network added that rain will become widespread on Wednesday morning, becoming heavier in the afternoon. While areas in the south can expect up to 50 mm, those on the eastern end of Lake Ontario may see upwards of 60 mm.

The heavy rain has the potential to cause flooding and pooling water in low-lying areas, the network warns. There will also be some embedded thunderstorms, which could increase rainfall in localized areas.

A ridge of high pressure situated in Atlantic Canada can be attributed to the low-pressure system stalling in southern Ontario on Wednesday, which is why there will be soggy conditions for several days.

Weather Network meteorologist Tyler Hamilton says that the rainfall from this system could exceed the amount of rain that has fallen during the first three weeks of April.

He also notes that while the last few weeks have been mostly dry, this system will “finish the month roughly around normal in the precipitation department.”

Adding onto the chilly, below-seasonal temperatures, strong winds of 60 km/h will hit on Wednesday, while more scattered showers are expected Thursday for all of Ontario. 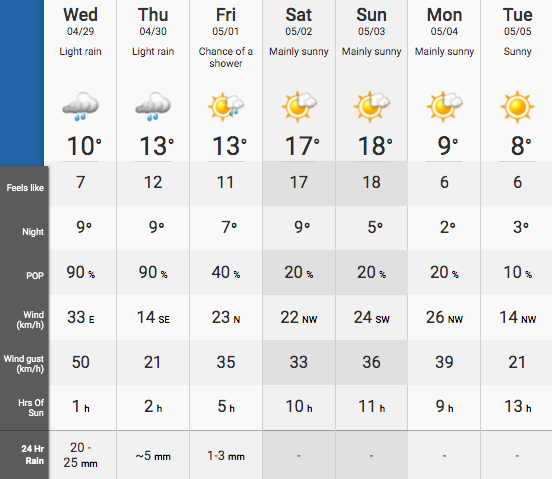 Warmer temperatures will visit briefly for the weekend, with widespread mid to upper teens and a few spots could reach 20°C, but a cold front is expected on Sunday.

The Weather Network projects the colder pattern will return for the first week of May and continue through to Mother’s Day, at least.

While it won’t be as chilly as it’s been, temperatures are expected to remain below seasonal.