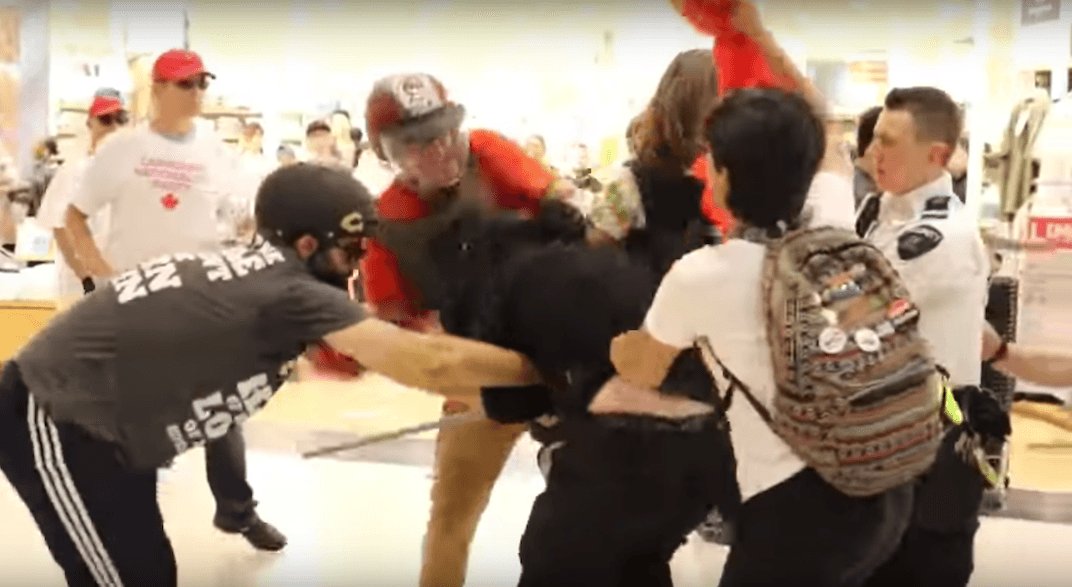 As the downtown core was flooded with people celebrating Pride over the weekend, Toronto’s Eaton Centre became violent after tensions built between two groups of protestors.

Videos circulating online show groups of people shoving, punching, and kicking each other inside the busy mall, in front of Uniqlo as onlookers watched in the distance.

On Saturday, June 22, a group by the name of PEGIDA Canada, who describes itself as “Patriots of Canada against the Islamization of the West,” held a rally near the mall and spoke about “Islamic teachings on homosexuality, media bias and Al Quds antisemitism.”

PEGIDA Canada said after its rally, a group of counter-protesters, referring to them as “Antifa,” began following the group and “harassing” them.

No sympathy for the fash.

Tensions continued to escalate between the groups and, eventually, a violent fight broke out inside the busy shopping mall. In videos shared online, security guards can be seen trying to pull the groups apart.

Many of those fighting are wearing skateboard helmets, balaclavas, and shirts with “Canada Nationalist Party” written on them. One person can be seen holding a red Communist Party of the Soviet Union flag.

Another angle of the mall fight yesterday in Toronto after Pegida.

Vanderweide sucker punching someone, and the same person on the ground being kicked and hit by Radovicka, while Boswick screams “fuck him up” and “show us your face!” pic.twitter.com/F68cfSe7Z0

A spokesperson from the Toronto Police Service told Daily Hive they are aware of the videos and the incident is now being reviewed by authorities.

“We can confirm this was not a Pride-related event or location,” said the spokesperson.

This incident happened after a similar disturbance at Hamilton Pride last weekend.

Hamilton Police arrested 33-year-old Cedar Hopperton for parole violations for participating in a public demonstration where peace was “peace was disrupted.”

You can watch the full video of the protestors fighting in Toronto here.