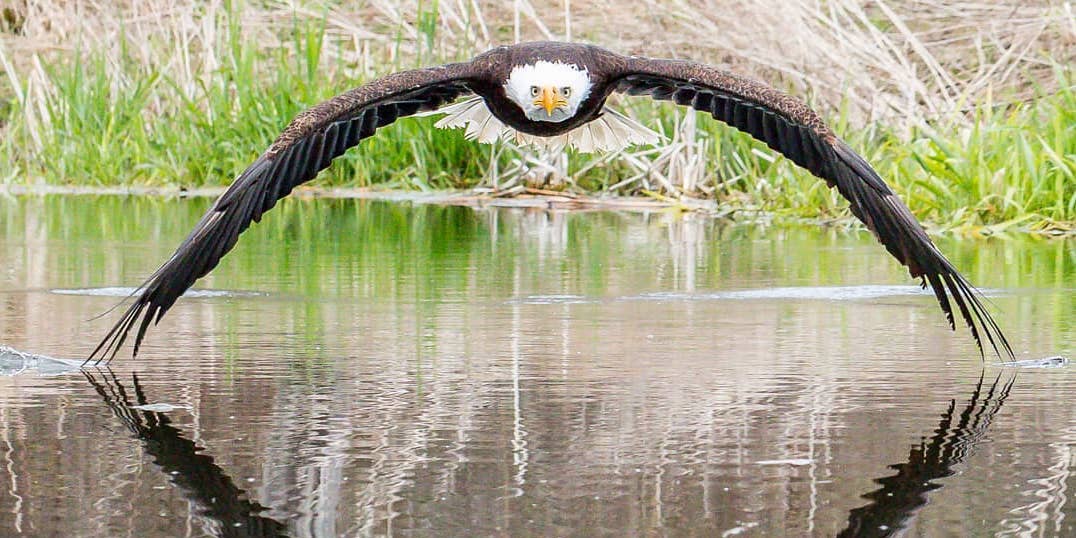 Picture this: A photographer waits quietly with his camera in hand at the Canadian Raptor Conservatory, a bird watching conservatory near Lake Erie in Vittoria, Ontario, south of Brantford. In the distance, a gorgeous bald eagle flaps its wings and starts heading right for him.

Now’s his chance. He lifts his camera to his eyes, lines it up and—click. Captured forever.

The photographer is Windsor resident Steve Biro, and the moment captured forever is perhaps the most perfectly symmetrical photo of a bald eagle you will ever see. Its wings are spanned out in an immaculate half circle, edges just skimming the water. A mirror image from left to right.

“So lucky to capture a symmetrical reflection of this beautiful Bald Eagle coming straight at me,” he wrote in the caption.

Biro did capture some other photos of the bird:

Needless to say, the photo quickly went viral from Biro’s Instagram and Facebook pages, shared by people around the world. So much so, that just four days after the original Instagram post, Biro reposted the image as his Facebook cover photo blemished with a watermark on the bottom left.

“I decided to repost as my cover with a watermark as this eagle is getting shared more than I imagined!” the caption reads.

At time of writing, the original Instagram has over 3K likes, and has been shared on Facebook over 900 times.