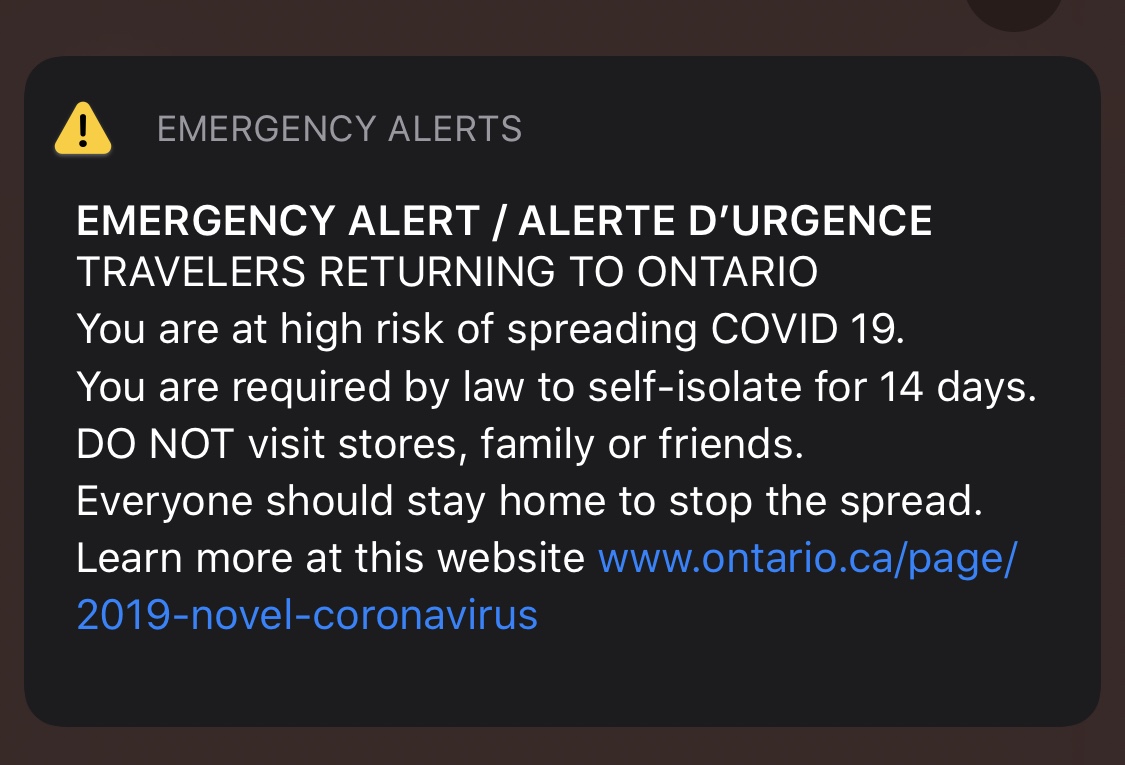 Premier Doug Ford said that Ontario will be sending out an emergency alert around 2 pm on Friday in response to the spread of COVID-19.

According to the province, the alert will be a warning for travellers returning to Ontario, telling them “you’re at high risk of spreading COVID-19 and required by law to self-isolate for 14 days. Do not visit stores or friends. Everyone should stay home to stop the spread.”

The premier said the will not be the last time this tool will be used to caution residents.

According to Solicitor General Sylvia Jones, the emergency alert will be issued to phones, radios, and televisions across Ontario to “reinforce the federal government’s order that all those returning from international travel are required by law to self-isolate for 14 days.”

At approximately 2PM this afternoon, we will be issuing an emergency alert to phones, radios, and televisions across Ontario, to reinforce the federal government’s order that all those returning from international travel are required by law to self-isolate for 14 days. 1/2 https://t.co/WRFC9FckFX

“This alert will remain active on phones for the next two weeks, so that travellers returning to Ontario are aware of this critically important directive through their devices,” said Jones.

Police are reminding the public not to call 9-1-1 when the alert sounds off.

When your mobile device sounds today, after receiving the province-wide alert regarding COVID-19, DO NOT call 9-1-1 to complain. 9-1-1 is for emergencies only.

A new order placed by the federal government on Thursday makes self-isolation mandatory for anyone entering Canada, and with it comes fines along with possible jail time for failure to comply.

According to the Government of Canada, it will use its authority under the Quarantine Act to ensure compliance with the order.

“Failure to comply with this Order is an offence under the Quarantine Act,” reads a statement from the government.

It adds that spot checks will be conducted by the Government of Canada to verify compliance.