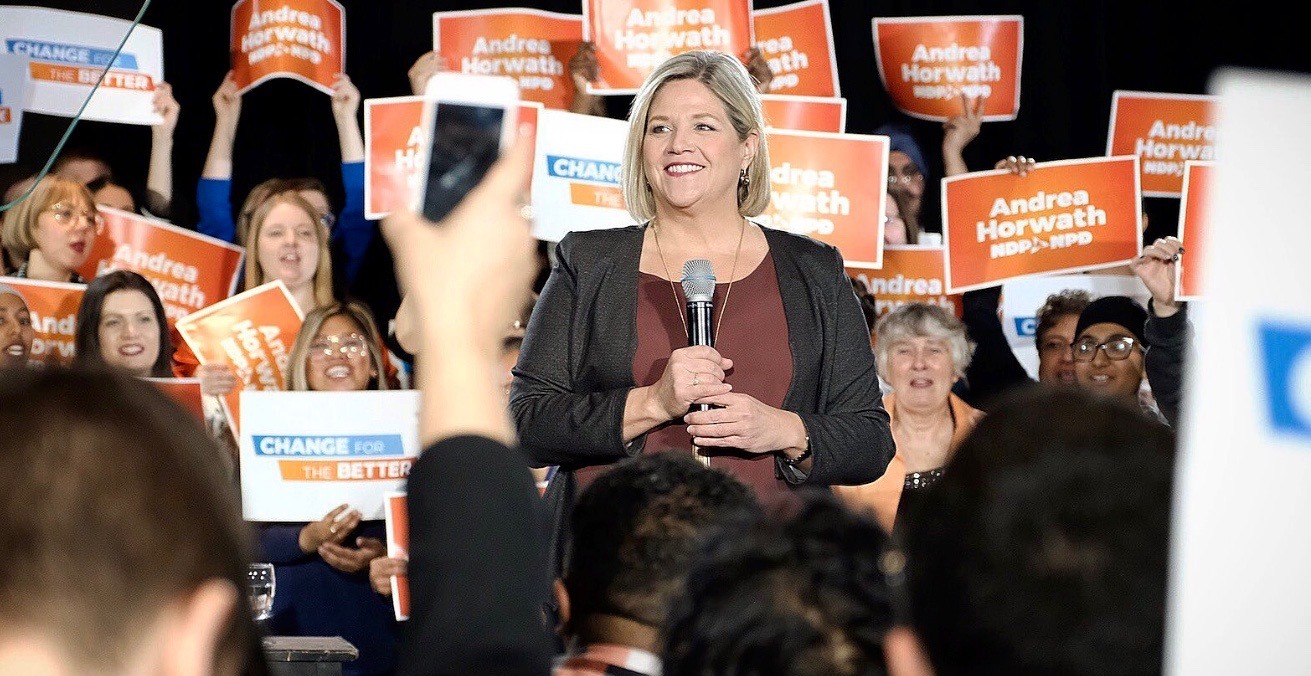 By now, you may have noticed the headlines dominated by campaign coverage for the upcoming provincial election. And, by now, if you have no clue what’s even happening, it’s a little embarrassing to ask (but, hey, we don’t blame you).

Luckily, we’re here to help fill you in on what’s happening in the Ontario election – which will be held on Thursday, June 7, 2018.

You’ll find a general overview here, a breakdown of the Liberal Party here, and an overview of the Conservative Party here. If you have questions about the New Democratic Party (NDP), you’re in the right spot.

Here are the basics on the NDP.

The NDP is a social democratic party that is about as far left as you can go in Canadian politics. The first woman to lead the Ontario NDP, Andrea Horwath (pronounced Andrea Horvath), has held the position since 2009 and been in politics for over 20 years. She is a member of the Legislative Assembly of Ontario (she was elected in 2004), representing the riding of Hamilton Centre.

While seemingly less loathed than her counterparts Kathleen Wynne and Doug Ford, Horwath isn’t without her own critics.

Horwath hasn’t been successful with Ontario’s larger urban centres in recent years. In the 2014 election, her urban support dwindled, leaving only one NDP seat in both Toronto and Ottawa.

That same year, she faced a backlash from prominent NDP supporters (including journalist Michele Landsberg) during her campaign, as they reported feeling “deeply distressed” by the party’s direction, accusing Horwath of betraying the grassroots of the NDP.

In that same speech, she outlined five main promises, which include things like cutting hydro rates and returning Hydro One to public ownership, offering universal pharmacare, converting post-secondary student loans into grants that don’t have to be repaid, and raising corporate tax rates.

She has also said she would hold the federal government accountable for Indigenous rights, and vowed to continue the expansion of GO rail and bus networks, including extending services to Niagara Region.

The biggest supporters of the NDP are organizations like unions and those with a more socialist and left-oriented agenda. With that said, Wynne’s spend-heavy budget could result in former NDP supporters switching teams.

Andrea Horwath has already lost supporters as of late, and was even accused of bullying employees. In February, well-known community activist and former supporter of Andrea Horwath, Deirdre Pike, a senior planner with the Hamilton Social Planning and Research Council and Hamilton Spectator journalist, announced she is jumping ship to run for the Liberals in Horwath’s Hamilton Centre riding (ouch).

Recent headline-making promises include one to “do better” than the Liberals when it comes to childcare than free pre-school care. “We simply must make child care affordable for every family in Ontario. Not just for the parents of children of certain ages, but for the parents of every age,” Horwath said on April 2.

The least controversial candidate, the headlines surrounding Horwath aren’t exactly the juiciest. Most recently, headlines have focused on her plans for full dental coverage, apparently the most newsworthy of her campaign promises.

Just like her rival Doug Ford in the PC party, Horwath has yet to reveal the full specific details of her platform.