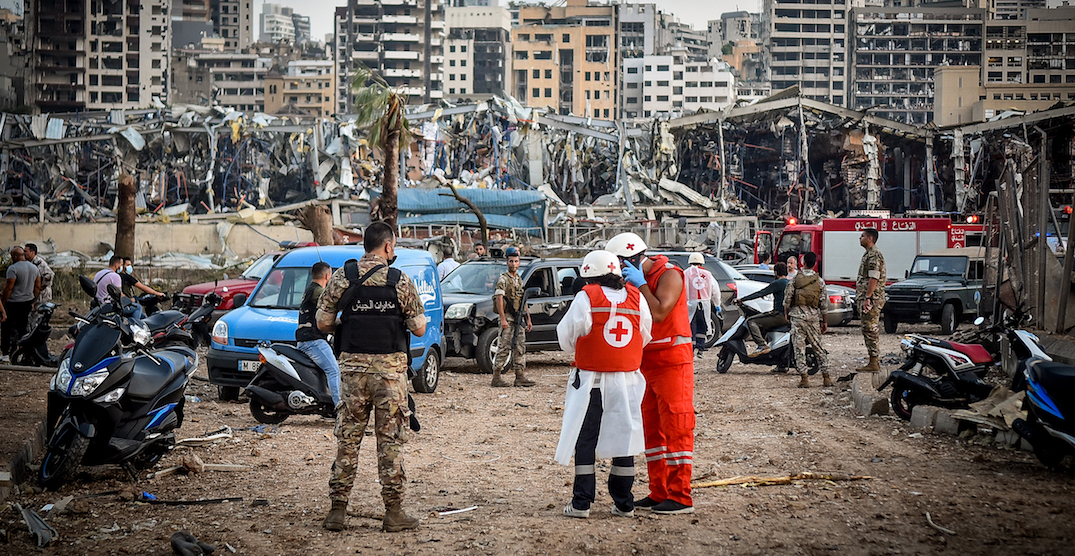 Lebanese Red Cross on the ground at the port where the explosion took place. (Alex Gakos/Shutterstock)

Premier Doug Ford announced the Ontario government is providing $2 million in “urgent” financial support to help families affected by the “tragic explosions” that occurred in Beirut, Lebanon on August 4.

On Tuesday, the province said the money will be provided to the Canadian Red Cross through the International Disaster Relief Program.

According to the province, this is one of the largest contributions the Ontario government has made towards an international humanitarian relief effort.

“My heart breaks for the victims and the families affected by this terrible tragedy in Beirut,” said Ford.

“Along with Ontario’s Lebanese community, we stand with the people of Lebanon in this time of grief. To support immediate relief efforts, we are providing the Canadian Red Cross with significant financial support so they can assist the people and communities in most urgent need.”

The Ontario government’s contribution will help the Red Cross respond to humanitarian needs as the situation continues to evolve in Lebanon, including for mobile health outreach.

The Red Cross is also working to coordinate emergency relief and recovery efforts, getting help to people in affected areas “as quickly as possible.”

“From the moment of the explosion in Beirut, Red Cross personnel have been responding around the clock by providing emergency medical assistance, food, water, masks, gloves, and other essential relief items to assist the people impacted by this tragic event,” Conrad Sauvé, president and CEO of the Canadian Red Cross, said in a statement.

“The funding announced today will go a long way to assist with the immediate needs of the individuals and families affected by the explosion, and as they begin their road to recovery.”

Since the explosion, more than 200 people were reported killed and thousands injured, with authorities expecting the numbers to rise. For now, the situation on the ground in Beirut remains “critical,” the Ontario release says.

On August 6, the Canadian government provided $5 million, of which the initial payment of $1.5 million will go immediately to “trusted” humanitarian partners on the ground including the Lebanese Red Cross via the Canadian Red Cross Society.

Lebanon’s President, Michael Aoun, has said the blast was caused by 2,750 tonnes of ammonium nitrate that had been stored unsafely in a warehouse at the city’s port.