The Ontario government released it’s 2020 budget with a $45 billion investment for the next three years, while the deficit remains at $38.5 billion. 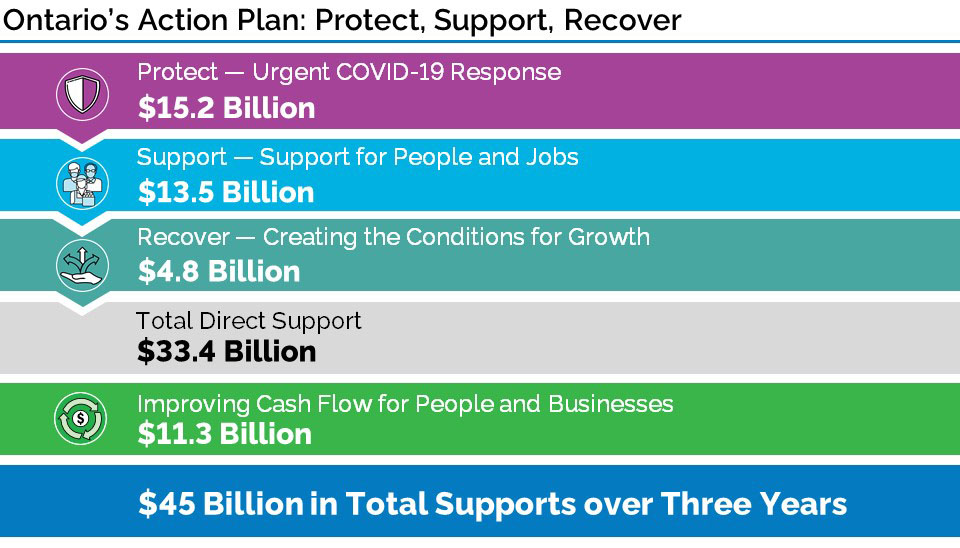 The budget outlines that there will be $594 million investment in the healthcare sector in 2020–2021 to provide the hospital sector with additional funding, “to address long-standing operational challenges.”

The funding focuses on helping small and medium-sized, and multi-site hospitals, to serve those living in rural and remote communities and to limit travel times across the country to hospitals.

There will also be additional investments to help hospitals across Ontario address the growing population, increasing access to highly specialized and innovative treatments, and reducing the use of unconventional beds.

And the government says managing long waitlists will be prioritized.

The government announced that $7.5 billion in new funding will go towards long-term care.

The new funding will see an increase in daily direct care from a nurse or personal support worker (PSW) per long‑term care resident to four hours a day over a four-year period.

The province will also make available $4 billion in 2021–2022 and a further $2 billion in 2022–2023 in support to “protect people’s health and to support the fight against the COVID‑19 pandemic,” the budget document says.

“This is the first newly built hospital to open in Ontario in 30 years that adds net new capacity to the system.”

To allow seniors to be comfortable at home, Ontario is proposing the new Seniors’ Home Safety Tax Credit for the 2021 taxation year to help seniors, and intergenerational families who have seniors living with them, “make their homes safer and more accessible.”

The proposed new personal income tax credit would support seniors regardless of their incomes and whether they owe income tax for 2021.

The budget notes that the Seniors’ Home Safety Tax Credit would be worth 25% of up to $10,000 in eligible expenses for a senior’s principal residence in Ontario with the maximum credit would be $2,500.

Eligible expenses would include grab bars and reinforcements around the toilet, tub and shower, wheelchair ramps, stairlifts and elevators. They would also include renovations to permit first-floor occupancy or a secondary suite for a senior.

This new tax credit would provide an estimated $30 million in support that would benefit about 27,000 people, including seniors and people who live with senior relatives.

Due to the economic hardships in the hospitality sector, the government is freezing beer tax rates until March 1, 2022, and is proposing to retroactively cancel the increase in wine basic tax rates legislated to occur on June 1, 2020.

The government issued an order under the Financial Administration Act during the state of emergency that prevents the increase from being applied between June 1, 2020, and December 31, 2020.

Ontario has made $1.3 billion in resources available to school boards, including an additional $381 million from the federal government’s Safe Return to Class Fund.

To make learning from home easier, the province is investing $7 million over three years.

“New online modular content for elementary grades will be introduced to cover the full curriculum and support flexibility between face-to-face and remote learning,” the budget outlines.

TVO and Groupe Média TFO will develop this content in English and French, respectively and the new learning modules will be introduced in a phased approach, starting with four subjects — language, math, science and social studies.

NDP Leader Andrea Horwath said Doug Ford’s 2020 budget “is waving a white flag in the battle against COVID-19, and telling people: you’re on your own.”

She added that Ford’s 2020-21 budget contains a nearly $100 million cut to planned spending on long-term care compared to the March fiscal plan for 2020-21.

And that the plan does not target schools properly by not reducing class cohort sizes, the biggest issue of the schools reopening plan.

“Doug Ford is telling seniors in dangerously understaffed long-term care homes that more staff won’t come in this year – they’re on their own,” said Horwath in a statement.

“He’s leaving more than 30 kids packed into classrooms. He’s chosen to give no new money to public health, leaving families at grave risk. Mr. Ford’s budget has no help for the jobs and small businesses at risk of disappearing. Workers aren’t even getting the paid sick days they need to stay home and stop the spread.