Two new positive cases of coronavirus have been confirmed by the Government of Ontario on Thursday morning.

The cases were confirmed by Dr. David Williams, Chief Medical Officer of Health, bringing the total number of confirmed cases in Ontario to 22.

According to Williams, a woman in her 50s returned from Italy on Tuesday, March 3, and presented herself to Grand River Hospital’s emergency department, in Kitchener.

She was assessed, tested, and discharged home the same day and remains in self-isolation. The Region of Waterloo Public Health is actively monitoring the situation.

The other case was a man in his 60s who returned from Iran on Saturday, February 29, presented himself to Sunnybrook Health Sciences Centre’s emergency department, in Toronto, on Tuesday, March 3.

He was also assessed and discharged home on the same day and remains in self-isolation. Toronto Public Health is actively monitoring the situation.

Both patients are said to have minimal contact with others.

“As a result of the coordinated efforts of our health care and public health system, all individuals who have tested positive have been quickly assessed and isolated,” Williams said. 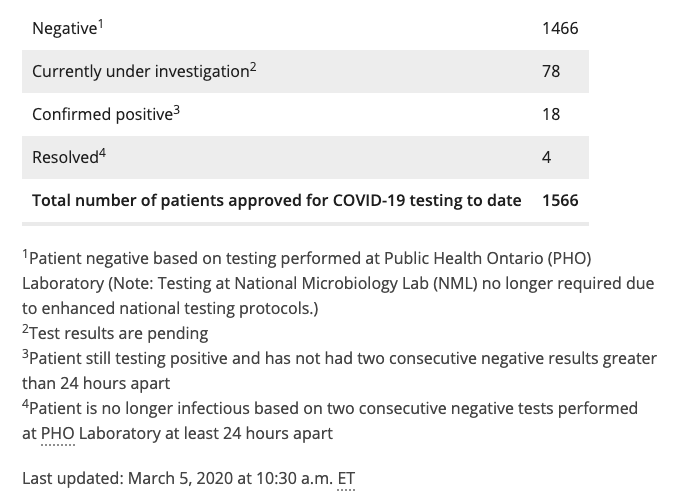 To date, there have been 22 confirmed cases in Ontario with four cases resolved — after each of the patients having two consecutive negative tests at least 24 hour apart. There are still 18 active cases.

“At this time, the virus is not circulating locally. However, given the global circumstances, Ontario is actively working with city and health partners to plan for the potential of local spread,” Williams said in a statement. “The province continues to carefully monitor this situation and encourage residents to stay informed by regularly reviewing credible information sources.”

All patients are being monitored and assessed closely, the province said.