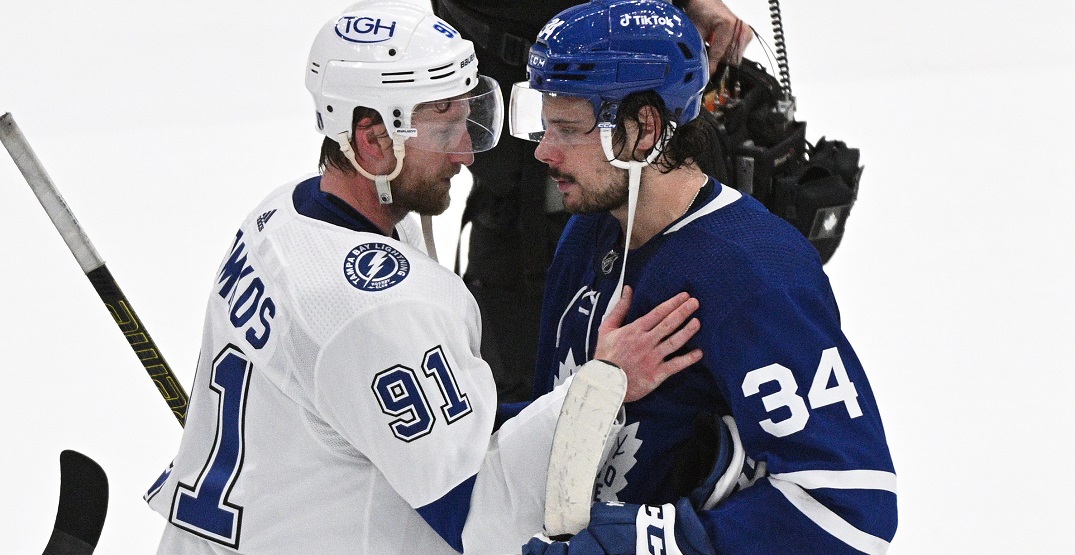 The Toronto Maple Leafs are dealing with a familiar result: a playoff exit in another heart-wrenching Game 7 after dropping a 2-1 contest on Saturday night.

And even if there’s a major caveat with this loss: they went down to the wire against the two-time defending Stanley Cup Champions in the Tampa Bay Lightning, the team’s stars don’t exactly seem to feel any better about how things shook out.

“We're getting sick and tired of feeling like this”

An emotional Mitch Marner speaks on what’s next for the Leafs after their Game 7 loss. pic.twitter.com/ajFpDfqxFy

“We work pretty very hard all year long and practices and stuff like that to be in these games and give yourself an opportunity. We did, [we] just didn’t come through,” Leafs forward Mitch Marner told reporters postgame while fighting back tears. “We’ve gotta make sure everyone just wherever they go home to the summertime, make sure that we come back as a better team: strength-wise, faster, quicker. We’re getting sick and tired of feeling like this, so we got to make sure we’re ready for this upcoming season.”

Marner put up two goals and six assists for a total of eight points in the Leafs’ seven playoff games. Criticized heavily for not scoring in 18 consecutive playoff games coming into the series, Marner posted goals in Games 1 and 2 while finishing second in the series in scoring.

But for the sixth time in as many seasons, the Leafs’ young trio of Marner, Auston Matthews, and William Nylander are heading to another first-round playoff exit.

“It’s gonna sting for a while,” Marner said about the loss. “But soon as it goes away it’s time to get back in that gym, work and be ready to go… our fans were great all all series long in this building, and were great tonight again. It’s just an unfortunate event that we couldn’t pull it out for our guys and them.”

Matthews led the Leafs in playoff scoring, putting up four goals and five assists over the course of the series.

Asked if the loss felt compounded based on past Leafs’ playoff failures, Matthews shook his head.

“I am only disappointed with the game tonight,” he said.

Like Marner, Matthews gave a shoutout to the Leafs’ fans as well in his postgame press conference.

“It was so much fun playing in front of these guys,” Matthews said. “I think we have the most passionate fan fan base in the league… The support means everything.”