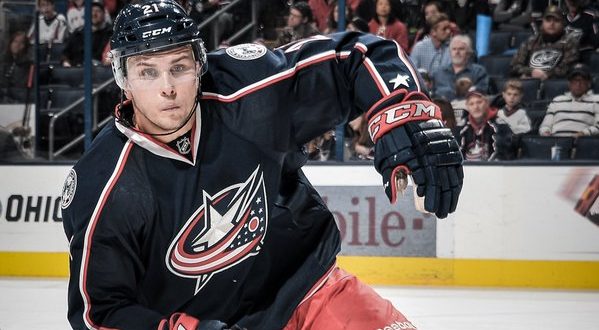 The Toronto Maple Leafs have made a trade to acquire forward Kerby Rychel from the Columbus Blue Jackets. Going the other way is defenceman Scott Harrington, who was originally acquired in the Phil Kessel trade.

The Leafs also added a conditional 5th-round pick, though it seems unlikely the condition will be met.

The pick in TOR-CBJ is a conditional 5th. If Harrington is put on waivers by CBJ and gets claimed, CBJ gets a 5th. If he clears, no pick.

The condition was put in simply because Rychel doesn't need waivers for a couple of seasons, Harrington requires them now.

The 19th overall selection in 2013, Rychel split time between the NHL and AHL last season. The 21-year-old put up nine points in 32 NHL games, and put up 27 points in 37 games with the Lake Eerie Monsters, with whom he won the Calder Cup this season.

Harrington also split time between the NHL and AHL last season in Toronto. The 23-year-old defenceman played 15 games with the Maple Leafs, managing one assist. Upon being sent down to the Marlies, Harrington had three points in 17 games before an upper body injury ended his season.

Kerby Rychel was rumoured to have wanted out of Columbus a while ago. Moving Harrington also frees up a bit of a log jam on the blue line.

This looks like a great deal for the Maple Leafs, who are acquiring a skilled young winger who should be able to play in the top-9 next season.

With this trade – in addition to the one for goaltender Frederik Andersen – the main pieces acquired from the Kessel trade are essentially now Rychel, Andersen, and Kasperi Kapanen.