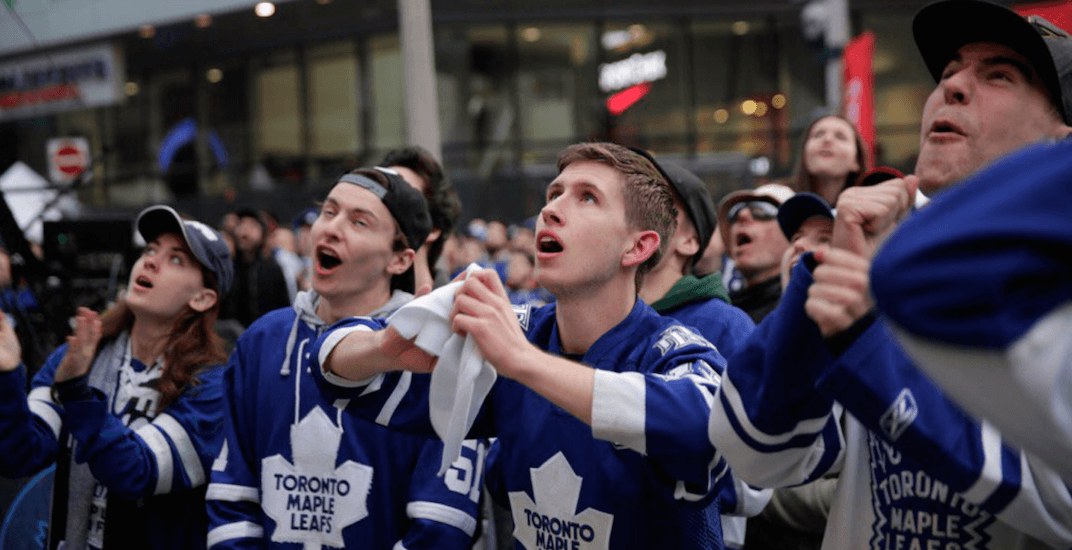 Well, that wasn’t exactly how the Toronto hockey gods wrote it up.

Two games into their playoff series against the Boston Bruins, the Toronto Maple Leafs find themselves down 2-0 after a 7-3 loss on Saturday night, just two days after dropping the opening game of the playoffs by a 5-1 score.

David Pastrnak managed three of the Bruins’ goals, capping off his hat trick with just over a minute left in the third period. However, there was a overwhelming sense that the game was decided much earlier than the final few minutes, as Game 2 wasn’t exactly the most competitive affair. After the first period, the Leafs found themselves losing 4-0, having already pulled starting goaltender Frederik Andersen in favour of backup Curtis McElhinney after the former allowed three goals on just four shots.

Mitch Marner scored his first goal of these playoffs to cut the score to 4-1 while Tyler Bozak would strike later in the period to make the score 5-2, but there was never much doubt that the Bruins would hold on for the victory. By the time James van Riemsdyk had scored the Leafs’ third goal to keep the Bruins at a 6-3 pace, there were a little over five minutes remaining in the third period.

For many Maple Leafs fans, the first two games of the series was a surprising, and frankly, upsetting experience…

This was EMBARRASSING there’s NO other way to put it,it’s the truth,but this series is NOT over yet,it’s on US to get home,get to work and find a way to get back to playing OUR hockey at home,I’ll NEVER GIVE UP on this team,it’s not in my DNA #TMLtalk #StanleyCup #StandWitness

Ok. Hear me out. Leafs goaltending has not been good in the last two games.
You: "oh my God. You think the Leafs goalies should have stopped THOSE shots."
Me: yes. Yes I do.

This is a Boston team that had one more win and 5 more loser points than the Leafs after 82 games. They're not this good and the Leafs aren't this bad either.

Other fans turned to last year’s first-round matchup against the Washington Capitals, where the Leafs ultimately fell in six games but held a 2-1 series lead and only trailed by greater than two goals once all series.

Last year we played a 118 point Caps team and never looked this bad.

For yet another contingent of fans, humour and existential dread was the only way to deal with it.

But for fans of opposing teams, Saturday night’s effort was a great chance to rub a little extra salt into the wound.

For the most recognizable face on the Leafs, however, there was little to say other than an expletive and a positive outlook on the upcoming Game 3, as the series heads back to Toronto Monday night.

In your wildest imagination could you have figured you'd be sitting here after two games not just down two but the line you're playing against has 20 points & you have zero?

Others pointed to the fact it was perhaps coaching decisions, namely the allocation of ice time, that was the Leafs’ downfall on the night.

Matthews played less than 19 minutes in a game the Leafs trailed from the 6th minute. PLAY. YOUR. BEST. PLAYERS.https://t.co/Qh1eTRBiRX

With Toronto hosting their first game of the series tomorrow, they’ll have to be at the top of their game in order to defeat the Bruins. If they’re looking for good omens, the team won their first home game last year, also in Game 3, as Tyler Bozak found the back of the net in overtime to put the Leafs up 2-1 in their series against the Washington Capitals.

With the their most important game of the season coming up, the Leafs should be looking to their top line to create some offence. Neither William Nylander nor Auston Matthews has found the back of the net through the opening two games, while their goaltenders have allowed an uncharacteristic 12 goals through just two games. In short, it’s looking like a must-win scenario on Monday if they have any hope of advancing in the series.

Gonna be mad for the next day and a half. Seriously. #TMLtalk

If Matt Martin isn't in the lineup next game, i'm going to really consider not watching game 3. I'd also take the Habs player Plekanec out of Torontos lineup and put the man (Moore) in who actually makes an impact to the team. #Leafs #TMLtalk

New game plan for the Leafs: do what the Raptors did, win. #TMLtalk