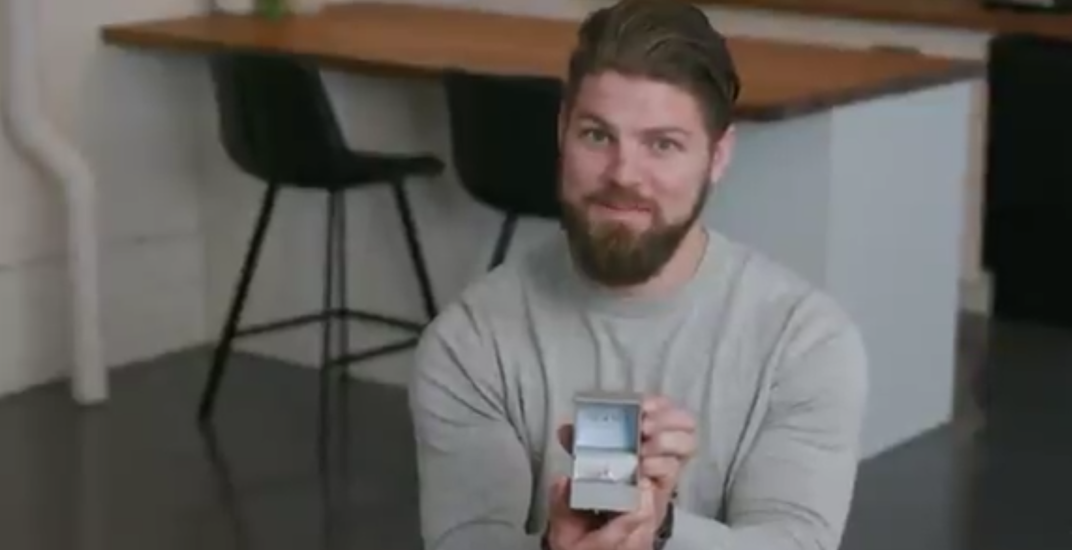 Marriage proposals and sporting events have gone together for a long time, though this one had a different twist.

Instead of getting down on one knee in front of a crowd of people in a stadium, Mike was sitting down on a couch next to his girlfriend Christina. Watching the Toronto Maple Leafs play the Boston Bruins on television, Christina was in for a big surprise.

During a commercial break, her boyfriend appeared on TV.

“Hi Christina, I know we’re at home watching the Leafs right now and you’re probably freaking out wondering what I’m doing on TV,” said Mike, appearing in a Peoples Jewellers commercial. “Christina I adore you, and I want to spend the rest of my life with you.”

The television audience then witnessed Mike get down on one knee before asking Christina to marry him.

Just one problem: everyone was left in suspense. Did she say yes???

Hours later, we had our answer:

And the next day, we saw how the proposal went down in real life:

Mike was looking for a big way to pop the question. So we decided to help him by giving him our commercial time during last night's @MapleLeafs game. We placed hidden cameras to capture the reaction, & we're happy to say…Christina said yes! #LovePeoples #LeafsForever pic.twitter.com/stnm1EvB3u