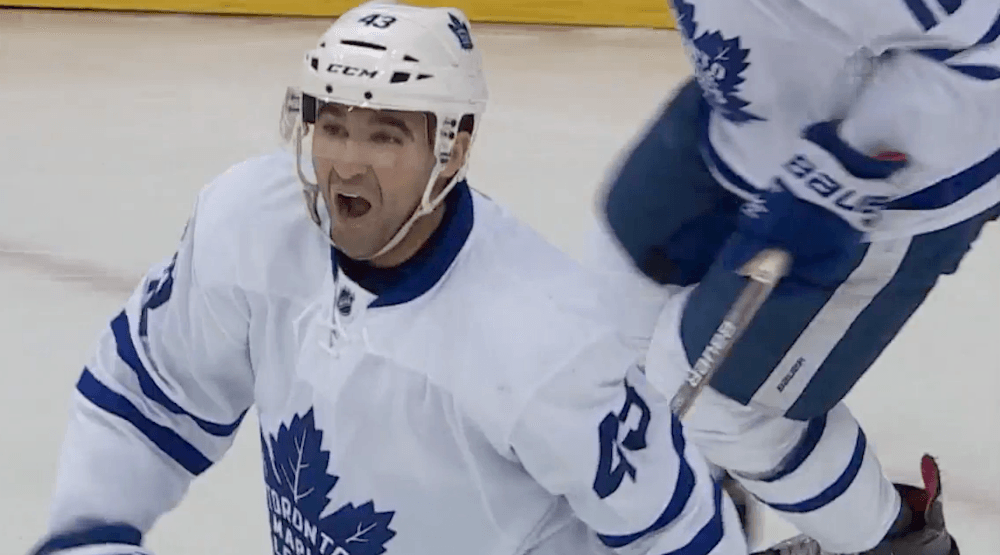 They say a 2-0 lead is the worst lead in hockey. It’s a stupid saying, of obvious reasons, but not on this night.

The Leafs went into the Verizon Center in Washington, and they punched a heavyweight fighter right in the mouth. Unfortunately, the Caps showed why they finished with the best record in the NHL this season.

Washington won 3-2 in a highly entertaining game, with an unlikely hero in Tom Wilson scoring the overtime winner.

But the young Leafs proved they can play with the Caps, so don’t count them out yet.

I mean, check out this graphic:

Well, you would have been wrong.

The Leafs came out on fire, using their speed to their advantage. They were aggressive on the puck and they took it to the Caps.

Just 1:35 in, Mitch Marner – playing in his first playoff game – got the important first goal of the game to give his team a boost.

A pretty passing play between Marner, Tyler Bozak, and James van Riemsdyk resulted in Washington goaltender Brayden Holtby losing his net. A quick play off the side of the net by van Riemsdyk bounced right to the middle and Marner pounced on it for a 1-0 lead.

Just 9:44 into the period, the Leafs made it 2-0, after a wonderfully patient play by Jake Gardiner to hold the puck. Gardiner’s shot went off a Caps’ leg and into the net.

Initially waved off by the on-ice referee, Nazem Kadri was deemed to have been (in the refs’ own words): “standing right in the middle of the crease.”

While Kadri was fully in the crease, video replay determined that he wasn’t affecting Holtby.

You knew it wasn’t going to be easy.

With just over nine minutes left in the first period, the Capitals got a break they needed. Washington received a 1:30 of 5-on-3 power play time, and capitalized, with Justin Williams scoring after a nice pass from TJ Oshie as the first penalty was expiring.

Toronto started off the second period well, outshooting Washington 9-3 midway through the period, and had the crowd quieted.

Then, a bad break.

Frederik Andersen, who had been excellent in net, had trouble with a Matt Niskanen shot and couldn’t find the rebound. Williams found it first, potting his second goal of the game to level things at two heading into the third period.

Everybody hits in the playoffs

Andersen was outstanding in the third period, making 13 saves, many of which were of the spectacular variety.

Just look at this save off Marcus Johansson with 3:29 left in the third.

Andersen stopped 36 of 38 shots he faced in regulation time, going toe to toe with Holtby.

Andersen was great for most of this game, and made an excellent save early in overtime too.

But this goal shouldn’t go in.