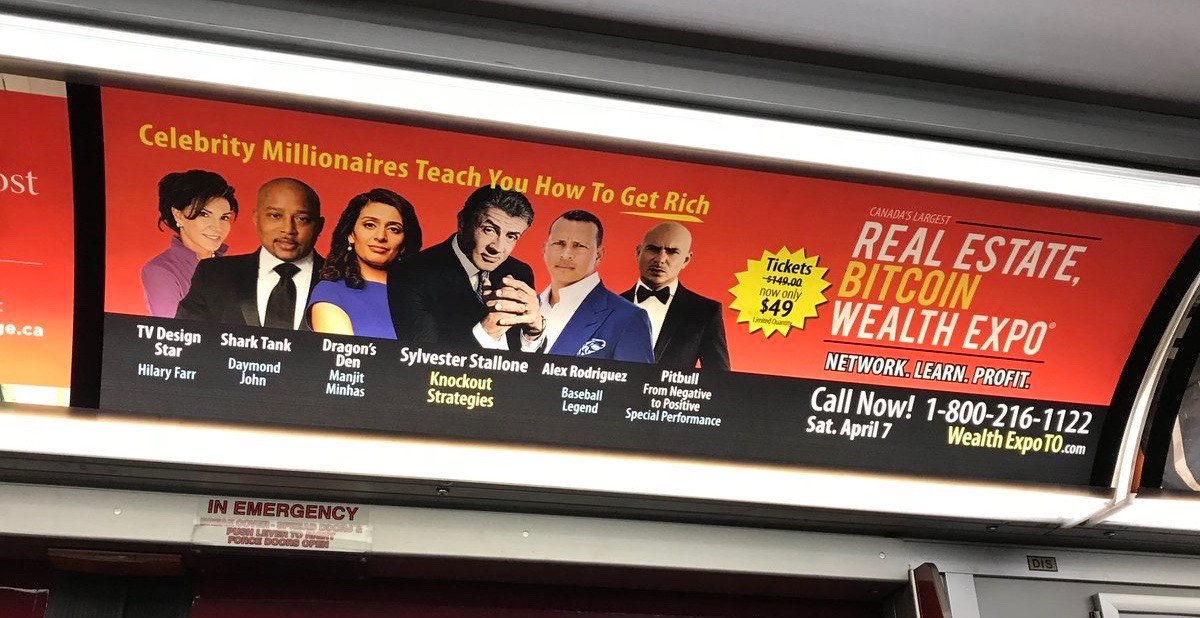 It was a limited ticket event, and entry prices started at $149.

That’s right, The Real Estate Wealth Expo landed in Toronto over the weekend, an event that boasted “Self-made millionaires teach you how to make money.”

Of course, if you’ve ridden the TTC in the past month you’ve no doubt seen the ads for the Expo.

The North American event had a stacked line up of speakers to teach you all about things like how to flip properties. “Once you learn our system, it’s fast and easy. And we help you get the money to fund good deals,” states the Wealth Expo page.

The one-day event was also set to motivate you and others to “achieve life and career goals,” and to think like a millionaire: “In 1 day learn from 28 self-made millionaires and get your millionaire mind.”

And who better to speak of real estate and getting rich than Pitbull and Sylvester Stallone.

While many of us regret not being able to attend such a line up of speakers, one attendee took the hit for all of us and live tweeted the event’s ‘highlights’.

In a series of tweets, Sean Craig showed us all what we were missing by not being there.

The tweets have been shared and liked hundreds of times, and for good reason. It’s Pitbull and Sly being pure… motivational speakers.

So far Pitbull has advised this investment conference that they have air to breathe and legs to walk with.

It is logical… and so is, the economies of selling cocaine?

After explaining to us the economies of scale in selling cocaine, Pitbull tells us that we will always have obstacles in life and business.

But he is a self-made rapper, he must be an expert on this topic of “wealth.”

Pitbull now tells us that if we made fun of babies, they would never learn to walk or stop crying. But instead we teach babies.

Hmmm… still not following his thoughts. But then, he did what he does best.

Pitbull, before performing “Give Me Everything,” stops to show us a picture of him performing on a Ryan Seacrest hosted special and assures us it is not photoshopped. pic.twitter.com/47aE16KAsd

“Pitbull, after explaining the concept of putting zeroes on the end of numbers (which in a monetary context he says is unimportant to life, perhaps Pitbull is inspired by philosophers like NYU’s Peter Unger or Princeton’s Peter Singer), tells us to have fun as his parting wisdom,” said Craig, before he continued to share Sly’s wisdom.

And Stallone obviously had a grand entrance.

Sylvester Stallone enters to fireworks and confetti, then opens with an anecdote about being mutilated by a hospital intern at birth. pic.twitter.com/tSO8NXOqOl

But he is clearly wise.

Stallone now tells us you should try different foods at restaurants, “open up your mind.” Then he tells us he wanted to work with animals in his life. Before this he told us he got bad grades in high school.

Stallone now tells us that, when eating raw eggs and sharing cottage cheese with pigeons, he realized there must be other people like him. pic.twitter.com/bQtVSf6AY7

This is so amazing. Sly Stallone, doing a paid speaking gig at an investment conference off the top of his head, observed to us that the clock in front of him still has a while to go. He is killing time, so he just starts talking about Cliffhanger for no reason. pic.twitter.com/3Jg0vshdnU

Is this getting weird yet?

Stallone goes on a weird screed about psychiatrists, says if you get over trauma of your dad beating you you’ll be sad the next day when someone makes fun of you. Then he rants about how money doesn’t buy happiness, “if you’re mental and you’re miserable that’s who you are.” pic.twitter.com/WQYKcpdAhl

He did end with the best advice for a Wealth Expo…

Sylvester Stallone wraps by again reminding us he did not do any preparation for this speech, is spewing out whatever. He quotes Robert Frost, then tells us the answer to life is “keep dancing, folks.” pic.twitter.com/AgdxGwN6g7

In case you really wanted to know what you missed, looks like it was mostly a Pitbull mini-concert.

So you know, “keep dancing, folks.”