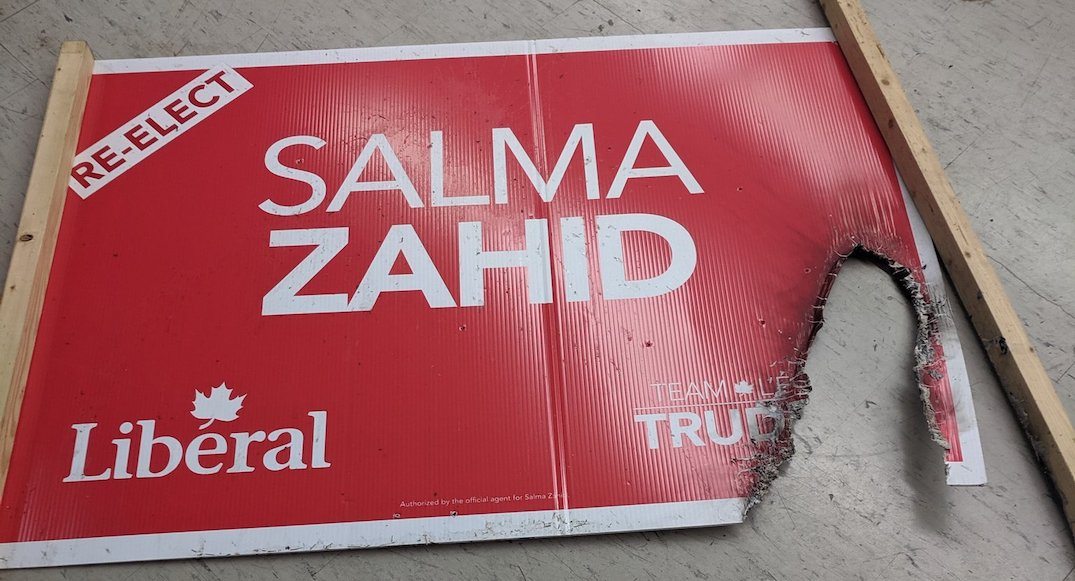 A Liberal candidate in Ontario says some of her campaign signs have recently been vandalized and lit on fire.

Salma Zahid, who is running for re-election as a member of parliament for Scarborough Centre, says she has found signs torn of out lawns, tossed in random yards, and into roadways.

Additionally, some signs have even been lit on fire.

But Zahid remains steadfast and strong, and said, “If you think you can intimidate Team Salma, you really don’t know us very well at all.”

Sign vandalism hasn’t been a part of #ScarbTO politics in the past. This time we’ve found signs torn out of lawns, tossed in random yards and even into roadways.

And now, lit on fire. If you think you can intimidate #TeamSalma, you really don’t know us very well at all. #elxn43 pic.twitter.com/uMvqVdpHNq

This act of vandalism comes just days after a Liberal candidate in BC said some of his campaign signs were vandalized with black colouring on his face.

Stephen Fuhr, who is running for re-election in the riding of Kelowna-Lake Country, said about six signs in high-traffic areas were coloured with what appears to be black marker.

This followed after images surfaced from years ago of Liberal Leader Justin Trudeau wearing blackface as well as brownface makeup while in costume at an “Arabian Nights” party, which caused a widespread backlash.